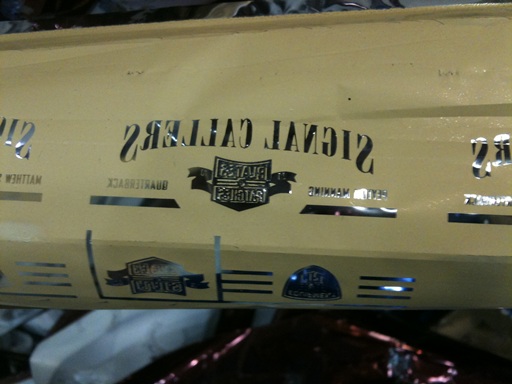 The long list of my sports heroes actually isn't long at all. John Elway's at the top, followed by the likes of Carlton Fisk, Vance Johnson, Ed McCaffrey, Tim Tebow, Larry Fitzgerald, Clint Dolezel and Will Pettis. That's about it.

The long list of my sports heroes actually isn’t long at all. John Elway‘s at the top, followed by the likes of Carlton Fisk, Vance Johnson, Ed McCaffrey, Tim Tebow, Larry Fitzgerald, Clint Dolezel and Will Pettis. That’s about it.

But after the events of Friday morning, I’m contemplating adding one more to the list: John Mata. Who’s John Mata? Glad you asked.

For starters, Mata is an Art Director at Panini America. He’s also the distinguished gentleman who — unprovoked, mind you — filled my email inbox this morning with the remarkably revealing images and video below detailing some rarely seen aspects of card production.

Turns out Mata (along with some of our other teammates whose jobs it is to make our trading cards look their best) took a field trip across town bright and early Friday morning to our printing and packout facility. He was admittedly blown away by what he saw and figured readers of The Knight’s Lance would be, too. So he snapped some pictures and rolled a little film.

True acts of sports heroism if you ask me.

“I was amazed by how much work goes into the producing the cards,” Mata said. “It’s a long, long road. Seeing the intricacies of the process put what we do on a whole new level.”

On Friday, 2010 Gridiron Gear Football, 2010 Plates and Patches Football, 2010-11 Donruss Hockey and 2010-11 Threads Basketball were all making their way through various stages of the manufacturing process, from printing and foiling to UV coating and cutting. As you’ll see, Mata captured a little bit of all of that and more.

“I loved the tour; it was very cool,” Mata said. “As a designer, you spend hours and sometimes days on a card, then you move on to the next project. And then months down the road, your cards are printed, or born, and you feel like a proud parent when someone says how much they love the way it looks.”

John, I’ve got a feeling they’ll be saying that a lot — about your designs and about this unprecedented access . . .

In this brief, rare look at the trading card production process, we take you to the floor of Panini America’s printing facility. Stay tuned next week for a more in-depth look at the process.

14 Replies to “Behind the Scenes: Panini America at Packout (with exclusive video)”