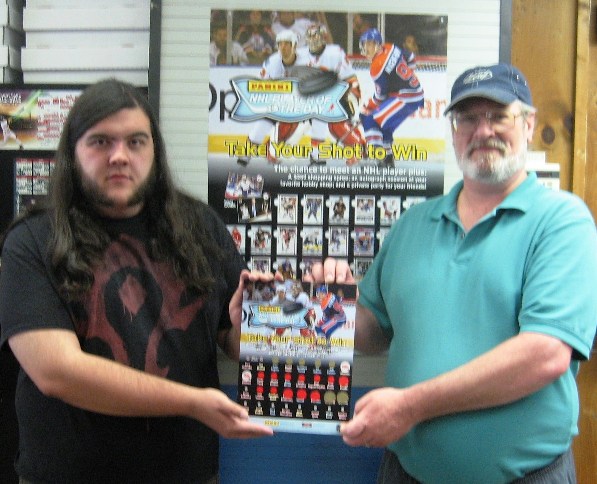 David Almeida, an avid NHL trading card collector from Southbridge, Mass., turned one lucky pack of Panini America NHL trading cards into one fantastic grand prize: The chance for him, his friends and family to spend this Sunday with Vancouver Canucks goalie and Boston-area native Cory Schneider.

David Almeida, an avid NHL trading card collector from Southbridge, Mass., turned one lucky pack of Panini America NHL trading cards into one fantastic grand prize: The chance for him, his friends and family to spend this Sunday with Vancouver Canucks goalie and Boston-area native Cory Schneider.
The 24-year-old Almeida is one of the more than 100,000 NHL card collectors across the U.S. and Canada who participated in the 2012 Panini NHL Player of the Day promotion at more than 250 hobby shops from February to April. He is among the thousands who earned prizes, but as the Grand Prize winner, the 24-year-old collector will be the only one to spend the day with an NHL player.

The fun-filled grand prize will begin June 3 when Schneider attends a private party at Almeida’s home in Southbridge, Mass., with family and friends. After the party, Almeida and his friends will take a limousine with Schneider to his favorite hobby shop – L/J Sportcards at 18 Central Street in Southbridge.  There, the entire community will join in as winners when Schneider spends an hour (2:15-3:15 pm) signing free Panini America autographed photos, shaking hands and posing for photos with up to 200 collectors. As part of his prize, Almeida will also receive a $250 shopping spree to spend on Panini America NHL trading cards at L/J Sportscards.
Collectors can reserve a spot at the front of the line in advance by visiting L/J Sportscards before the event. All other autographs will be awarded on a first-come, first-served basis. The free autographs will be administered exclusively on Panini Private Signing photos which will be given away free at the event. For additional details, call 508-765-0533.
Almeida, began collecting cards last year to spend more time with his 16-year-old brother, Alex. He collects a variety of players with his favorite being Boston Bruins goalie Tim Thomas. In addition to collecting Panini America NHL trading cards, David is a huge fan of the Boston Bruins and Worcester Sharks (AHL team) and he plays street hockey regularly. A graduate of Southbridge High School, Almeida currently works with his father running estate sales.
“I would like to congratulate David and L/J Sportscards for being the lucky winners of the 2012 Panini NHL Player of the Day hobby shop promotion,” said Jason Howarth, VP of Marketing for Panini America. “We relish the opportunity to bring our loyal customers up close and personal with their favorite players, and creating unforgettable memories for passionate NHL trading card collectors and fans. We were especially excited to hear that David is new to the world of card collecting. We’re sure this experience will keep him enjoying the fun of collecting Panini NHL trading cards.”
Schneider, a native of Salem, Mass., completed a spectacular collegiate hockey career by leading Boston College to a pair of NCAA Finals appearances. He has served as the back-up to All-Star Roberto Luongo in Vancouver since 2010, but midway through the 2011-12 season, Schneider’s playing time increased and he supplanted Luongo to start in goal for the Canucks for games 3-5 vs. the L.A. Kings in the 2012 NHL Playoffs.  Experts predict Schneider to have a larger role with the team next season.
Almeida’s journey to the grand prize began when he uncovered the designated Panini NHL Player of the Day from a pack of cards he purchased at the hobby shop. In fact, he is such a regular customer at L/J Sportscards that he won more than 20 daily prizes throughout the month. He was then selected as the grand prize winner from all the winners in his local shop. Upon being entered into the national sweepstakes along with 250 other entrants, he was randomly selected as the grand prize winner.
In the inaugural Panini NHL Player of the Day promotion last year, Thornhill, Ontario, native Joel Silverman spent the day with Toronto Maple Leafs rookie Nazem Kadri. Panini America has been sponsoring the NFL Player of the Day promotions at hobby shops for more than a decade. Earlier this year a Phoenix collector spent the day with Arizona Cardinals running back Beanie Wells.
Stay tuned to The Knight’s Lance for complete coverage of Sunday’s big event.