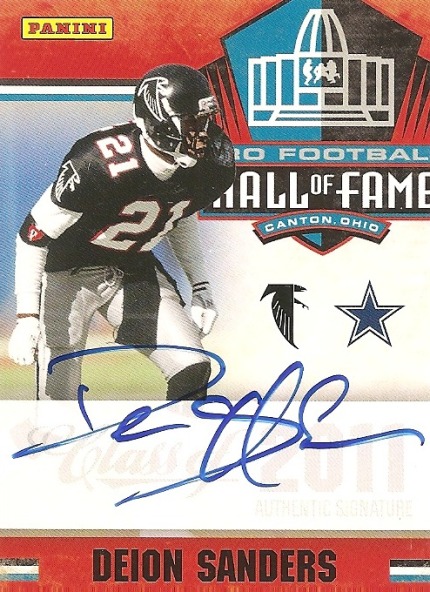 Just when collectors thought Panini America's plans for this week's National Sports Collectors Convention couldn't get any better, the company saved perhaps its most exciting surprise for last.

Just when collectors thought Panini America’s plans for this week’s National Sports Collectors Convention couldn’t get any better, the exclusive trading card manufacturer of the Pro Football Hall of Fame saved perhaps its most exciting surprise for last.

On Tuesday afternoon the company announced that it has included special 2011 Timeless Treasures Football Class of 2011 Hall of Fame Preview autograph cards into its wrapper-redemption packs for the show.

Panini America has randomly inserted less than 10 autographs from each 2011 Pro Football Hall of Fame inductee — Marshall Faulk, Deion Sanders, Richard Dent, Shannon Sharpe, Chris Hanburger and Ed Sabol — into the popular wrapper-redemption program that will be conducted throughout the show at the Panini America booth.

Certified autograph cards of the newest Pro Football Hall of Famers have been among the most sought after sports cards on the market in recent years, with the likes of John Elway, Jim Kelly, Mike Webster, Marcus Allen and Hank Stram routinely selling in the $300 to $400 range.

This marks the second straight year that Panini America will produce the official Hall of Fame certified autograph cards. Last year’s cards of Emmitt Smith and Jerry Rice, released in 2010 Classics Football, each are valued today at $200 by Beckett Media. Expect similarly lofty secondary market values to be fetched by this year’s class — especially Sanders, Faulk and the rare-signing Sharpe.

The special 2011 cards being previewed at the National this week in limited quantities will release to the collecting masses next month in the highly anticipated premiere of 2011 Timeless Treasures Football.