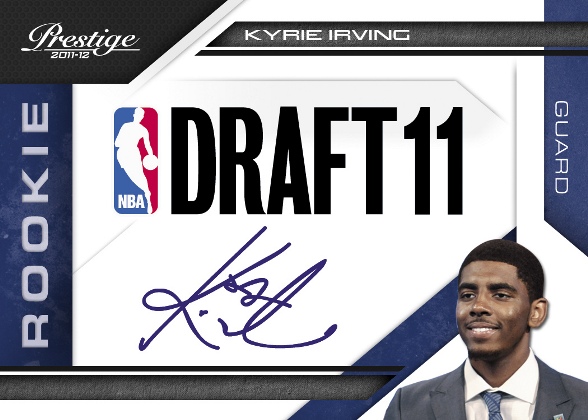 Panini America, the world’s largest sports and entertainment collectibles company and the NBA’s exclusive trading card and sticker partner, has inked an exclusive agreement with Kyrie Irving, the No. 1 overall pick of the Cleveland Cavaliers in last night’s 2011 NBA Draft.

Panini America, the world’s largest sports and entertainment collectibles company and the NBA’s exclusive trading card and sticker partner, has inked an exclusive agreement with Kyrie Irving, the No. 1 overall pick of the Cleveland Cavaliers in last night’s 2011 NBA Draft.

Despite having his first and only season at Duke cut short by a toe injury, the athletic point guard proved quite prolific in the 11 games he did play, averaging 17.5 points, 4.3 assists and 3.4 rebounds per game while shooting 52.9 percent from the field.

“It’s a great feeling. I am proud and excited to join the Panini team,” Irving said. “This is another great class that I’ve been drafted into – joining fellow No. 1 overall picks Blake Griffin and John Wall as well as Kobe Bryant and Kevin Durant – and I’m honored to be added to that roster.”

As part of the exclusive agreement, Irving’s autographs and memorabilia will be found only in Panini products. He also will be featured on Panini packaging as well as in Panini’s national advertising, marketing and social media initiatives. His first officially licensed NBA trading cards will be included in Panini’s 2011-12 NBA Prestige product.

Irving and his Panini America teammates will also be the faces of the company’s new Panini Authentic memorabilia division that launched in May.

“In just 11 games at Duke, Kyrie displayed the kind of uncanny playmaking and leadership abilities that basketball collectors and NBA fans covet,” said Mark Warsop, CEO of Panini America. “Certainly he caught our attention inside Panini America headquarters. We’re tremendously excited to add him to our unparalleled roster of NBA talent. He’ll fit in nicely here.”

Panini America is the only company in the world that manufactures fully licensed trading cards and stickers for the NFL, NFL PLAYERS, NHL, NHLPA, NBA and FIFA World Cup. The company also owns exclusive entertainment licenses with Disney, Justin Bieber and Michael Jackson, and more than 600 global licenses with other sports and entertainment properties.

Panini America became the exclusive trading card partner of the NBA beginning with the 2009-10 season. The Panini Group purchased the industry’s second-oldest trading-card company, Donruss, in March 2009 and formed the new subsidiary, Panini America, Inc. Since that time, Panini has taken significant steps to fortify its position in the sports card category as a whole and the basketball landscape in particular, including an exclusive relationship with the Naismith Memorial Basketball Hall of Fame.