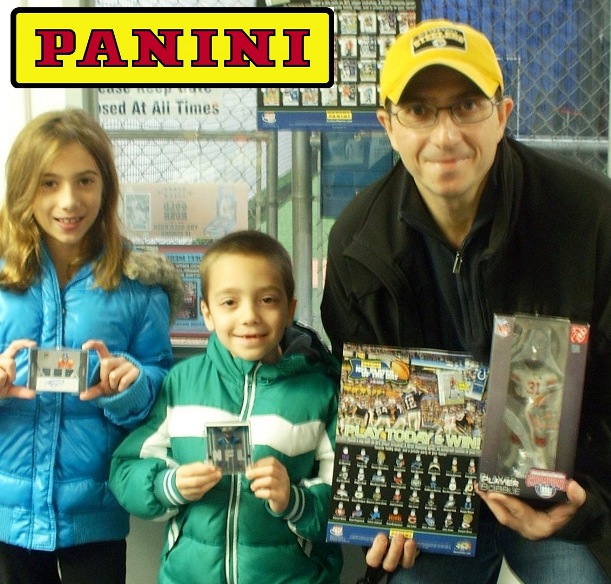 Nicks will attend a private party at the Rosato home while the rest of the NFL teams are choosing players in the 2013 NFL Draft. Following the party, they will take a limousine together to Attack of the Baseball Cards (60 Milltown Rd, Union, N.J.). There, the community will join in as winners when the Giants’ star wide receiver spends an hour signing free autographs and posing for photos. Rosato will also receive a $250 shopping spree to spend on Panini America products at the shop.

“I am still in shock,” said the 43-year-old Rosato, who was surprised with the announcement at a special Super Bowl Sunday Pack Wars party at his favorite hobby shop, Attack of the Baseball Cards. “I have been a collector since I was a little kid, so it’s really special to continue collecting as an adult with my 7-year-old son Michael and 9-year-old daughter Emily. They are both hooked on football and collecting cards, so I know this experience will be truly special for them.”

Here’s a video of Rosato learning about his prize at the special event:

“The Panini NFL Player of the Day has been the hobby’s favorite promotion for more than a decade because it helps hobby shops sell more Panini NFL trading cards and rewards loyal collectors,” said Jason Howarth, Vice President of Marketing for Panini America. “Although this marks the 13th consecutive year that a collector gets the chance to spend a day with an NFL player. Making card collectors’ dreams come true never gets old for us at Panini. We’re looking forward to spending this special day with Frank.”

Rosato was among more than 100,000 NFL card collectors who participated in the 2012 Panini NFL Player of the Day contest at more than 500 hobby shops nationwide from September through November.  He is among the thousands who earned prizes but as the Grand Prize winner, he is the only one to spend the day with an NFL player.

At least 200 fans will collect a free autograph from the event. Collectors can “reserve” a spot at the front of the line in advance by visiting Attack of the Baseball Cards before the event. All other autographs will be awarded on a first-come, first-served basis.  For details, visit Attack of the Baseball Cards or call them at 908-687-8107 or visit https://attackofthebbcards.com.

“I am thrilled for Frank, his friends and family as well as our loyal customers who will truly enjoy this memorable experience,” said Steve Mandy owner of Attack of the Baseball Cards. “The Panini NFL Player of the Day promotion has been a favorite of our customers for more than a decade and although we’ve awarded thousands of prizes, it’s great for one of our customers to be the Grand Prize winner.”

Rosato’s journey began when he uncovered the designated Panini NFL Player of the Day from a pack of cards he purchased at Attack of the Baseball Cards. Each participating store selected a grand prize winner for a spot in the national sweepstakes in which he proved to be the luckiest of the entrants. More than 60 collectors earned prizes in the national sweepstakes including autographed football and autographed NFL trading cards.

Since breaking into the NFL as the 29th pick of the 2009 NFL Draft from the University of North Carolina, Nicks has been one of the most dynamic receivers in the NFL, tallying 229 receptions 3,424 yards and 25 touchdowns. In the Giants’ historic 2011 postseason, he added 28 receptions and four touchdowns in four playoff games, including 10 receptions for 109 yards in the Super Bowl.