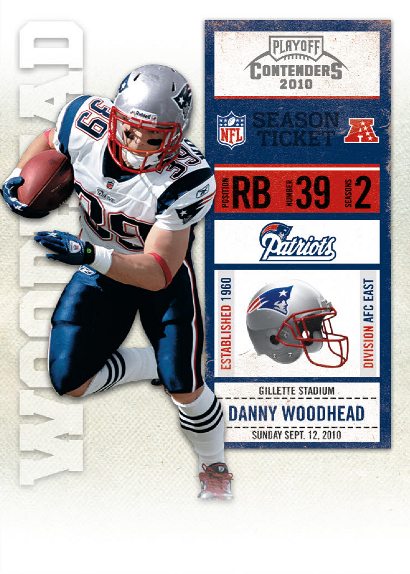 Congrats on the monster #NFT!

Danny Woodhead’s seemingly out-of-nowhere transformation from practice-squad everyman to do-it-all New England Patriots running back has carried with it many fringe benefits, chief among them cult-hero status in Boston, sudden NFL stardom and, undoubtedly, the undying adoration of swooning female fans everywhere.

Danny Woodhead’s seemingly out-of-nowhere transformation from practice-squad everyman to do-it-all New England Patriots running back has carried with it many fringe benefits, chief among them cult-hero status in Boston, sudden NFL stardom and, undoubtedly, the undying adoration of swooning female fans everywhere.

One perk Woodhead hasn’t enjoyed during his meteoric ascension: Appearing on an NFL Rookie Card. That will change in a big way early next month when Panini America releases 2010 Playoff Contenders Football.

“Like most NFL fans across the country, we were captivated by Woodhead’s buzz-generating performances in 2010 and his emergence as a huge fan favorite in New England,” says Jason Howarth, Panini America’s Vice President of Marketing. “We decided early in the season that he was a must-have inclusion in one of our late-season products. We’re confident that Patriots fans and football collectors will find his first official Rookie Card to be must-have material, too.”

The wondrous Woodhead rushed for 7,962 yards at Chadron State and earned consecutive Harlon Hill Trophies as the best player in Division II. He signed with the New York Jets in 2008 as an undrafted free agent but missed all of that season with an injury suffered in training camp.

He began 2009 on the Jets’ practice squad, joined the active roster in mid-October and finished the season with 24 total touches, 167 all-purpose yards . . . and still cloaked in relative obscurity. Of course, then the 2010 season arrives.

It begins with Woodhead stealing scenes on HBO‘s “Hard Knocks” while fighting for a spot on the Jets’ active roster. He makes the team, plays in Week 1 and then gets cut by Rex Ryan the next day. Four days later, Bill Belichick comes calling and the rest is, well, utterly captivating.

All Woodhead did in 14 games with the Patriots was live a true-to-life football fairytale for a Patriots team that finished 14-2. He rushed for 547 yards and five touchdowns, caught passes for 379 more yards and another score, and captured the hearts and imaginations of countless fans along the way.

But the stat Woodhead is likely to remember most from this season? 1: The total, at long last, of his NFL Rookie Cards.