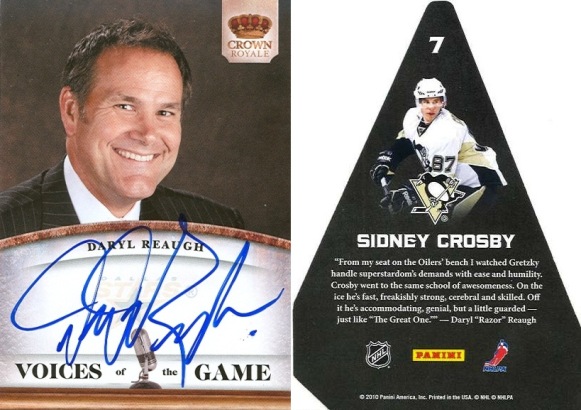 Daryl 'Razor' Reaugh would likely be the first to tell you that his career as an NHL broadcaster has been far more successful than the decade he spent in net for the Edmonton Oilers and Hartford Whalers from 1984 through 1983. And he'd make you laugh while doing it.

Daryl ‘Razor’ Reaugh would likely be the first to tell you that his career as an NHL broadcaster has been far more successful than the decade he spent in net for the Edmonton Oilers and Hartford Whalers from 1984 through 1993.

And he’d make you chuckle while doing it.

Indeed, Reaugh wasn’t necessarily blessed with an All-Star gift of puck-stopping grab, but his gift of gab is the stuff of legend. His belly-laugh brand of wit and wisdom has made him a Dallas star in his own right during 15 years calling Dallas Stars games alongside Ralph Strangis; it’s also paved the way for colorful opportunities with the likes of ABC, ESPN, FOX, Versus and EA Sports.

Reaugh is so much more than just a talking head, though. He’s also a passionate and perspective-filled hockey genius who’s as responsible as anyone for making the NHL a success in Texas.

Add it all up — the expertise, the wickedly vast vocabulary, the electricity-quick comebacks, the swoon-inducing looks  and the propensity for dispensing priceless “mind vitamins” — and it’s easy to understand why Reaugh is such a big part of 2010-11 Crown Royale Hockey.

In addition to being one of 12 celebrated hockey announcers featured in the autographed Voices of the Game insert, Reaugh is also the nickname-sake analyst behind Razor’s Choice, a dazzling die-cut insert for which Reaugh himself selected the checklist and provided pure card-back poetry.

If you haven’t yet perused his fine work in Razor’s Choice, clearly you’re missing out. Some of his most masterful bons mots include . . .

On Pavel Datsyuk: “This guy is flat-out the best puck-jacker I’ve ever seen. I’ve witnessed him take the pill away from the opposition four times in one shift. And when he has the puck he’ll embarrass defenders with bullish strength, balletic balance and lubricious puck skills.”

On Chris Pronger: “Pronger is a towering stack of talent, petulance and nastiness. It seems everything he does within a 40-foot radius of his own net is an infraction. He’s the prince of the one-minute penalty; not enough to draw a call, but optics tell you it was illegal. Bottom line, he wins. A lot.”

On Mike Richards: “Heart, hard work and hitting. That’s what I think when I hear Richards’ name. The heart and hard work are displayed when his team is down a man and the NHL’s best penalty-killing center is either sacrificing in his own end or pressing to score at the other. The hits come often and are at times bowel-shaking.”

On Mike Fisher: “Three reasons to fawn on Fisher: One, if I had a team that needed a big, talented, utility-knife, second-line center, he’d be my guy. Two, anyone would have to admit he has pretty eyes. And three, he has beautiful, multi-talented country queen Carrie Underwood for his wife. That’s a hat trick!”

For the rest of Reaugh’s wordsmith wizardry, I’d suggest you finish collecting the set. Before you do, though, be sure to watch this interview with the man himself, shot earlier this winter during his Voices of the Game signing session.