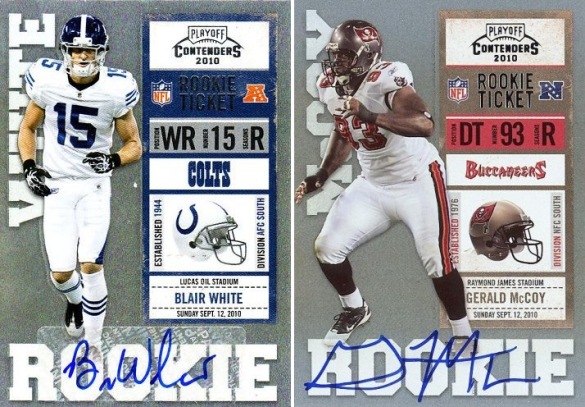 One of the most asked questions these days among passionate football folks has nothing at all to do with the NFL’s expiring CBA, Cam Newton’s 40 time or whether or not the Green Bay Packers have what it takes to repeat. No, the most prolific query making the rounds is something much more collecting focused.

On Monday, we began slowly revealing answers with the list of SPs from the product’s Legendary Contenders Black Autographs insert. We followed that up Wednesday with the skinny on short prints found within Contenders’ captivating Super Bowl Tickets Black Autographs.

But we’ve saved the most anticipated revealation for today, for right now. Finally, after three weeks of wild speculation and even wilder eBay bidding trends, we present to you, for the first time anywhere, print run numbers for the highly coveted Rookie Ticket Autographed Rookie Cards.

Clearly, you’ve waited long enough. What follows is the complete list of Rookie Ticket SPs with quantities of 500 or less. This list, it should noted, was tucked away in the Panini America vault alongside the product’s pioneering Golden Tickets.