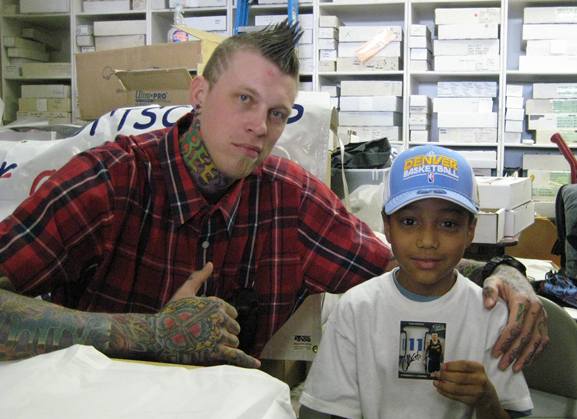 When Mike Fruitman, owner of Mike’s Stadium Sportscards in Aurora, Colo., contacted Panini America in late November to tell us he was conducting a signing with Colorado cult hero Chris “Birdman” Andersen of the Denver Nuggets, we were only too happy to help.

When Mike Fruitman, owner of Mike’s Stadium Sportscards in Aurora, Colo., contacted Panini America in late November to tell us he was conducting a signing with Colorado cult hero Chris “Birdman” Andersen of the Denver Nuggets, we were only too happy to help.

Come on, Andersen stands 6-10, weighs 228 pounds and sports more colorful tattoos than a whole season’s worth of “LA Ink.” You try telling him “no.”

So we put our best basketball foot forward, boxing up a bevy of 2010-11 Panini America hoops heirlooms and hobby boxes to help add just a little more buzz to the day’s festivities.

Last Saturday, Andersen landed in Mike’s shop for an event that was, by all accounts, as big, boisterous and buzz-generating as the signing’s star attraction.

We dispatched longtime collector, frequent Beckett contributor and Colorado resident Ryan Schear to cover the event for us. The following words and pictures are his:

The Nuggets’ big man, known for his emphatic “bird” celebrations following his momentum-shifting blocks and thunderous dunks, transformed Mike’s into a runway when he touched down last Saturday to loud applause from an excited crowd. He quickly went to work, taking pictures, shaking hands, giving pounds and signing numerous pieces of memorabilia.

Andersen was gracious enough to take his time with every signature, even adding his popular “Bird” inscription to most pieces. Throughout the signing, Andersen took time to distribute Panini basketball packs to many lucky collectors. After the signing, Fruitman conducted drawings and contests to hand out sweet Panini gear, including cards, hats, T-shirts, signed photos and wax. Everyone in the crowd went home a winner thanks to Panini’s contributions and the complete “Bird” experience.

“Having Chris ‘Birdman’ Andersen at the store was one of our best days in the shop’s history and our best-attended signing ever,” Fruitman said. “More importantly, we got to put Panini cards into the hands of brand new collectors while also rewarding some of our more intense collectors. Chris really enjoyed giving out packs of 2010-11 Panini Rookies & Stars to kids who attended.

“Thanks go to Panini for stepping up to support hobby shops. They also deserve props for helping put cards into the hands of first-time collectors and for helping us take care of Panini fanatics.”