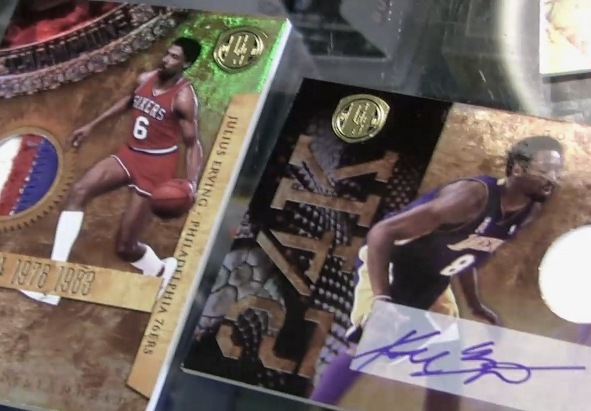 The price of gold reached a record high of more than $1,600 an ounce earlier this week. Good news for investors. Better news for collectors.

The price of gold reached a record high of more than $1,600 an ounce earlier this week. Good news for investors. Better news for collectors.

2010-11 Gold Standard Basketball, the newest NBA trading card product from Panini America, released on Wednesday blinging with 50 special cards made with 11 grams of real 14-karat gold — marking perhaps the first time in the history of the sports collectibles industry that cards have ascended in value before they were even released.

For the record, the current value of 11 grams of 14-karat gold is roughly $330. Clearly, though, these cards will be worth way more than their weight in, well, gold. An Aaron Rodgers Golden Ticket from 2010 Playoff Contenders Football sold for more than $3,000 earlier this season while the Golden Ticket of Edmonton Oilers rookie Taylor Hall sold just four days ago for $2,500.

But those numbers could pale in comparison to what gold brings in the basketball market. The LeBron James Solid Card surfaced earlier this week with an asking price of $7,500. Meanwhile, the first Solid Gold card unearthed this week — appropriately featuring Golden State Warriors star Stephen Curry — is also online with a $1,300 price tag.

In addition to the one-of-a-kind cards made of real gold, 2010-11 Gold Standard Basketball also includes more than 2,000 additional cards – dubbed “Gold Rush” — with a small piece of 14-karat gold embedded into the card. Early feedback on those has been positive, too. A Derrick Rose Gold Rush card has already changed hands for the handsome Buy It Now sum $400.

Those of you engaging in your own personal Gold Standard gold dig will enjoy the following video from Tom “The Ripper” Key, who spent some quality time this week at Big League Cards in Casselberry, Fla., documenting some golden moments for us, including the pulling of a Sold Gold card of a certain Celtics legend.

After the video, take a look at a gilded gallery of Sold Gold beauties.

12 Replies to “Gold Mettle: Even Before Release, 2010-11 Gold Standard Basketball Rose in Value”