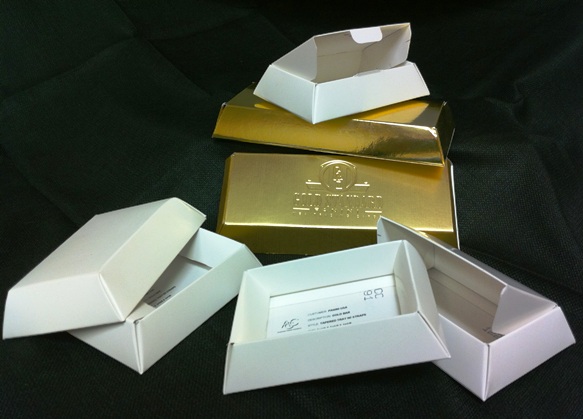 It's a shame, really, that Panini America Production Manager Jeremy Johnson spends much of his time on tone-setting, first-impression aspects of our products that most collectors can't wait to destroy.

It’s a shame, really, that Panini America Production Manager Jeremy Johnson spends much of his time on tone-setting, first-impression aspects of our products that most collectors can’t wait to destroy.

Johnson, a Michigan native, is the Prince of Packaging around these parts; the guy people visit when talk turns to boxes. Certainly Johnson’s Midas touch will be all over 2010-11 Gold Standard Basketball when the brand new product releases in late May.

There was no roadmap for a product like Gold Standard; no past packaging to mimic, no similar products on the Panini America roster to replicate. So when Linda Sanchez, Johnson’s production partner in crime, first came up with the concept in early January of creating a box inspired by an authentic gold bar, the team set out to make her vision sparkle.

Three furious months and no less than four different variations later, Gold Standard has a home for its 12-card, $200 packs that’s fit for a king. The process, it should be noted, was every bit as highly detailed and hectic as creating the trading cards that will go inside. The finished box might be almost as collectible, too.

Johnson tells us how it all came together:

Speaking of the finished piece, I think Johnson speaks for all of us who’ve been lucky enough see it.

“We loved it right when we saw it,” he says. “It definitely achieves the look and idea that we had from the beginning. The first goal of packaging is to catch somebody’s eye and to separate it from all of the other products that your competing against for shelf space and noticeability.

“We’re trying to keep our products original and creative beyond just the cards inside.”

The following gallery provides a glimpse into those efforts and includes images of several Gold Standard prototypes, behind-the-scenes schematics on how the finished piece came together and the golden finished product itself.

12 Replies to “Good as Gold: The Anatomy of a Package”