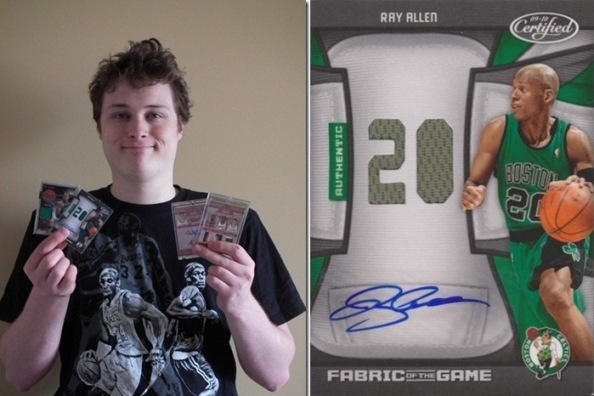 There's something indescribably cool about having a native Australian refer to you as "mate." It was a thrill I first got to expereince via Twitter thanks to passionate basketball collector Rhys Evans, a resident of Tasmania and a huge fan of Ray Allen and the Boston Celtics.

There’s something indescribably cool about having a native Australian refer to you as “mate.” It was a thrill I first got to experience via Twitter thanks to passionate basketball collector Rhys Evans, a resident of Tasmania and a huge fan of Ray Allen and the Boston Celtics.

Evans has been collecting in the land down under — which in and of itself carries a unique set of challenges — since early last year. In a relatively short time the Aussie has amassed a spectacular array of impressive Panini America cards, some of which were pulled in Evans’ recent video break of 2010-11 Absolute Memorabilia Basketball.

For more on Evans’ sweet collection, in his own unique words, keep reading . . .

“The collection started off innocently enough in early 2010 with some base cards and the odd memorabilia card for a few dollars off eBay. One of my earliest additions that gave me a great head start was an eBay win of 168 Ray Allen memorabilia and auto cards. At only a few hundred dollars it was a great boost for a fledgling collection. Around the same time I started collecting, the landscape had recently changed with Panini America becoming  the sole NBA card producer. Naturally, I was interested to see what the product was like as opposed to the other brands I had been acquiring. Starting with single cards I moved to packs, boxes and eventually a case of 2009-2010 Studio.

“Collecting in Australia, particularly Tasmania, is not the easiest thing. Up until this year I had never seen a brick-and-mortar hobby store and the inflated prices blew me away. The tiny amount of brick-and-mortar stores has fostered a strong online community on sites such as Ozcardtrader, where the camaraderie and willingness to help other members out is absolutely awesome. Through Ozcardtrader I have chatted and traded with people from countries such as the Philippines, France and America to name a few. The love and dedication people have for this hobby in the online community is absolutely magic.

“A great moment for me was when I was offered Ray Allen swatch card #’s 1-5 out of a 10-card run in 2009-10 Panini Limited as well as swatch #’s 5,7 and 9 of the 10-card prime version of the card. Naturally I picked them up and they hold a special place on my shelves. By far the most memorable moment of collecting for me came from contacting a seller on eBay in Canada. This seller had some cards for auction that, once sold, probably would not surface on the market again. He then pulled the cards off auction and let me pay an amount we had worked out, gladly helping a fellow collector. These are the sorts of people who keep the hobby thriving.

“As with any collection, there are some special cards. As I write this, there are two Panini America cards in my possession that just cannot be separated. Firstly, a phenomenal-looking Ray Allen Proof from the 2009-10 Studio release that has a magnificent — albeit stickered — autograph. This card is quite special to me as I have also tracked down and purchased the yellow printing plate. Secondly, a fantastic-looking NBA Apprentice card from the 2010-2011 Timeless Treasures release featuring Luke Harangody, Kevin Seraphin and Gani Lawal. This card has an amazing seven colours, a three-card print run and it just looks fantastic.

“Overall, I’ve had a great first year in the hobby with the opportunity to pick up some great cards with more sets being released all the time such as Absolute Memorabilia which, as it did last year, has blown me away with the design and overall appearance of the cards.”

Rhys, thanks a ton for sharing your collecting highlights and the following gallery with The Knight’s Lance. I think I speak for all of us when I say: “Nice work, mate!”