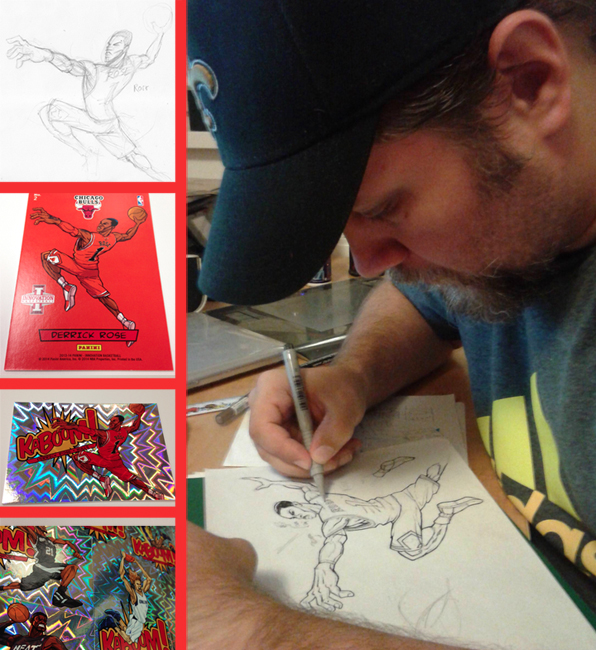 If you've ever wanted to know what some of your favorite NBA players would like as comic-book superheroes, well, you're not alone. In fact, it's that fantastical notion that first led Panini America Creative Director Brandon Lesley to reach out to talented Hungarian illustrator Gyula Nemeth in an effort to make that vision become a trading-card reality.

If you’ve ever wanted to know what some of your favorite NBA players would like as comic-book superheroes, well, you’re not alone. In fact, it’s that fantastical notion that first led Panini America Creative Director Brandon Lesley to reach out to talented Hungarian illustrator Gyula Nemeth in an effort to make that vision become a trading-card reality.
The result? The appropriately named “Kaboom!” insert, a 20-card chase in 2013-14 Innovation Basketball that’s sure to leave an impact on any collector lucky enough to pull one of the one-per-case, psychedelic pieces of pop art.

“Brandon first approached me last November with the idea of making a 20-piece insert where we depict current NBA stars as comic book characters,” Nemeth says from his home studio in Budapest. “Needless to say, I really loved the idea. My last project with Panini America was the 2014 Hometown Heroes Nicknames insert set and I had so much fun with that project that I immediately got pretty excited about this new opportunity.”
Kaboom! is the newest innovative inclusion in the two-year-old Innovation franchise; but a combination of rarity, eye-popping printing technology and original illustrations might just make it the most memorable. Over the weekend, we caught up with Nemeth for an in-depth interview on how Kaboom! came together. Stick around after the Q&A for a complete gallery of the 20-card Kaboom! set as well as some early sketches that started it all.
The Knight’s Lance: What were your thoughts when we first approached you with this idea?
Nemeth: Well, it was a huge challenge on several levels. I really love the aesthetics of comics, but I rarely had to draw extreme action poses up to that point. Now I had only a few weeks to come up with 20 different dunking poses with different perspectives and different dynamics. The style was different as well. I have drawn around 100-110 baseball cards for Panini America, but all of those were vector art. For the Kaboom! insert I really had to get comfortable with a whole new style in a short amount of time. It wasn’t easy, but it was fun all the way.”

TKL: Between the time you started your first sketch until you colored your final sketch, how long did the entire project take you to complete?
Nemeth: “It was four weeks altogether.”
TKL: From preliminary sketch to finished piece, what steps are involved in the process?
Nemeth: “I had to do my homework first: Research. I had to come up with a pose for each player. I did some sketches in small scale, then I drew my favorite one in bigger scale, with more details. Facial features, muscles, everything. The inking was usually a bit quicker, but it had to be pretty tight. I could fix some minor problems on the computer after scanning. Then came the color phase on the computer and the additional jersey details, stripes, numbers, script and stuff.”
TKL: How long have you been illustrating and how would you describe your style?
Nemeth: “I started working in graphic design in 2000, but I have worked on illustration projects simultaneously from the beginning. After some years I started to get into vector art. The past six or seven years, my two main fields were vector illustration and logo design. Last year, I started to drift toward traditional illustration. I still do vector stuff and identity projects but also a lot of hand drawn stuff. Kaboom! was one of the nicest traditional illustration projects this past year. I learned a lot during that intense month and if I could do the set again now, it would be even better.”

TKL: How did this project differ from the work you’ve done on our Triple Play Baseball sets?
Nemeth: “The research was very similar, but for Kaboom! I needed much more time for each player illustration this time, since the style was more elaborate; and I also had to look out for uniform details. With Triple Play Baseball, I had to make uniforms more generic, I had to restrict myself to not to put too much detail on the uniforms.”
TKL: What obstacles does being based in Hungary present for a project like this?
Nemeth: “Fortunately, with some flexibility, seven hours of time difference is not a problem these days. Very often I work in the afternoon, evening, and late at night, so — if necessary — I can discuss stuff with Brandon without any problem. I work the same hours as the creative staff in Irving. The majority of my work comes from the U.S. and other countries, and the distance and time difference have never caused a problem.”

TKL: What was your first reaction when you finally saw the completed cards?
Nemeth: “I am familiar with the high quality of the Panini products, but still I was pretty amazed by the result. The thickness of the cards, the typography, the graphic design, all give the illustrations a big boost. They look terrific.”

TKL: Are you a big NBA fan? A big collector?
Nemeth: “Well, I follow all sports a bit. I know the players, the teams, I read the news; but more than anything I am a huge football fan since the early 1990s when I was a kid. I can say with confidence that I know more about football history than most NFL fans in the U.S. I’m also in my ninth year as a defensive coordinator for an amateur team here in Budapest.
“I am very specific when it comes to collecting cards. I collect only illustrated football cards. Most of them came out in the 1990s. It’s always so nice to see when art and sports meet in some way. It’s a very rare thing. That’s why I think this Kaboom! insert is so special.”
TKL: Which of your Kaboom! illustrations do you like the best? Which one presented the most challenges?
Nemeth: “My top five are John Wall, Rajon Rondo, Chris Paul, Dwight Howard and Blake Griffin. Those were the illustrations I did last, so around that time I was more comfortable with the style. You can see that those poses are looser, even more dynamic, than some of the other ones. OK, Howard is not that loose, but I like the expression and the character. The hardest piece was the first one, Kobe Bryant. I still think that is an impossible dunk to perform in real life.”
TKL: What do you want collectors to know about this set?
Nemeth: “The big deal with Kaboom! is that you can have so many photo sets in your collection, but with an illustrated card, you get something extra. If you score one of the Kaboom! cards, let’s say, Kyrie Irving, and 10 years later you put all your Kyrie cards on a table, the Kaboom! piece will still stand out. As I said, the meeting of art and sports is a rare and special thing.”
TKL: Anything else you want to add?
Nemeth: “One little detail is that I had to come up with basketball shoe designs for every player. We could not use existing brands, so I could fool around with some color-matching designs for every team.”
Below is the complete 20-card Kaboom! gallery, as well as some of the preliminary sketches Nemeth produced for each one. Enjoy.