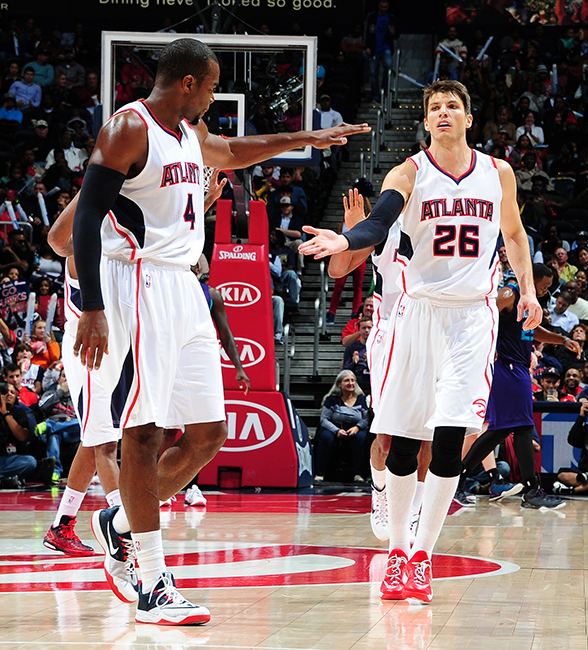 For most hawks, November is a time for flying south. Red-tailed hawks, Broad-winged hawks, Sharp-shinned hawks, they all spread their wings, catch a cozy updraft and soar toward warmer climates – where for the rest of the winter they can kick up their claws and sink their beaks into a tasty beverage or two while riding out the frigid temps in temperate bliss.

Spurning the instinctive nature of its fine-feathered namesakes, this cast of NBA birds set its collective compass for a different direction, a polar-opposite path, and headed due north, migrating straight to the top of the Eastern Conference with the most wins in the NBA.

Atlanta’s improbable and unprecedented journey to the peak of the standings began Nov. 28, when the Hawks clipped their winged counterparts, the Pelicans, by a count of 100-91.

That win initiated a run of nine consecutive victories, which turned into a stretch of 14 wins in 15 games, and then a streak of 26 wins in 28 games that brought the team to the midpoint of the season with an eye-popping 33-8 record.

“Atlanta is a major challenge,” Pistons coach Stan Van Gundy said. “Look, I think when [the streak] started, everyone was waiting for them to fall, and they’re just not falling. That’s an outstanding team. Look, when you’re playing .800 basketball over half of a season . . . that’s an incredible rate.”

Riding a red-hot wave of stifling defense and scorching shooting, Atlanta found itself perched at the top of the Eastern board all by itself halfway through the schedule for the first time in franchise history, boasting more wins than it had ever achieved through 41 games. Twice before had the Hawks notched at least 30 wins in their first 41 games — 1993-94, when they were tied with the Knicks for first in the East at 30-11, and way back in 1958-59, when the St. Louis Hawks’ 30-11 mark was good for tops in the Western Division and second best in an eight-team NBA.

For those thinking Atlanta’s rapid ascension can be solely attributed to a weak conference or soft schedule, think again.

The Hawks have posted a 10-2 record against teams from the superior Western Conference and are currently on a nine-game winning streak against the West, which is a single-season franchise record.

From Dec. 15-23, Atlanta defeated Chicago, Cleveland, Houston, Dallas and the Clippers. The collective winning percentage of those teams was .685 (87-40) — the highest combined mark of any five teams that the Hawks had ever beaten consecutively.

During a week’s span in January, the Hawks recorded convincing victories over Washington, Toronto and Chicago, putting the second-, third- and fourth-ranked teams in the conference in their place.

Boasting a double-digit advantage on 11 of the 14 teams in the conference, Atlanta has risen to its lofty height on the strength of its team-first mentality, which runs the risk of sacrificing All-Star recognition for its players.

That’s OK, though. There is no I in Atlanta. There is no me in Hawks. They would rather pass to each other, even if it means passing on personal accolades.

“I think they enjoy sharing the ball,” second-year Hawks coach Mike Budenholzer said. “They enjoy playing with each other, and they know that they’ll all reap the benefits of it if everybody plays unselfishly.”

And thanks to that selfless approach, the benefits have been plenty, on both ends of the floor.

The offense has been a well-oiled machine, with the team pumping in 103.3 points through 41 games — second in the conference behind Toronto. Defensively, they have had each other’s backs, buckling down to allow just 96.6 points, the fewest in the league.

Pacing their high level of consistency has been their continuity. Atlanta was one of just two teams, along with the Clippers, to have five players start at least 36 of the first 41 games.

Anchoring the squad in the starting lineup have been Al Horford in the middle, Paul Millsap and DeMarre Carroll in the frontcourt, and Jeff Teague and Kyle Korver in the backcourt.

All five starters have produced double-digit scoring averages in 30-plus minutes per game, while Dennis Schröder, Mike Scott, Pero Antic and Thabo Sefolosha have all come off the bench to contribute a handful of points in addition to sustaining the squad’s high defensive standard.

Keeping the ball moving and spreading the floor, Atlanta ranked second in assists (25.8) through the first half while shooting the 3 better than any other team (38.9 percent).

Those numbers were boosted by Teague, who paced the team with 7.4 helpers, and Korver, whose 53.6 percent from beyond the arc was the highest mark ever for a player through his team’s first 41 games.

Ranked fourth in the NBA in shooting percentage, the Hawks have hit 47.1 percent, with Horford bolstering that number with a team-high 53.8-success rate. Also leading the way with 1.4 blocks, the pivot man has been instrumental in Atlanta holding its opponents to 43.7 percent shooting from the field, fifth best in the NBA.

“We’re a confident group,” Teague said. “We just know if we play the right way and play great defense and be aggressive defensively that we’ve got a chance to be in any ballgame. We’re just playing in a really good groove right now.”

The determined defensive attitude has been as contagious as a cold in Hotlanta, with all hands on deck each and every possession to thwart the opposition. The team ranks fifth in the league with 9.0 steals, with four players (Teague, Millsap, Carroll and Sefolosha) averaging more than one.

On the glass, it is once again a concerted team effort that gets the job done as five players (Millsap, Horford, Carroll, Sefolosha and Korver) average more than four boards, with Millsap leading the glass-cleaning brigade at 7.9.

“I feel like we have very good rhythm right now,” Horford said. “I feel like all the pieces are starting to come together, we’re starting to figure each other out and how to play together. That’s why [we’re having] the success.”

After playing predominantly on the road, where Atlanta has earned a franchise-record 12 consecutive wins, the team began the second half of the season like they finished the first. The Hawks kicked off a seven-game home stand by defeating the Pistons, 93-82. The win brought their home record to 17-3, best in the East, and extended their winning streak to 13 games, one shy of the franchise record set in 1993-94.

Atlanta’s flight toward the postseason will certainly get more turbulent, and its path through the playoffs will undoubtedly be difficult to navigate, but by the time all their Red-tailed, Broad-winged and Sharp-shinned brethren have returned home and are enjoying the northern summer sun, maybe the Atlanta Hawks will finally finish their journey and be feathering their nests with NBA rings.

Golden Hawks
The scorching-hot Atlanta Hawks are enjoying one of the finest seasons in franchise history, which should make key Hawks cards in Panini America’s upcoming 2014-15 Gold Standard Basketball even more in demand. Below is a quick preview of some of the cards in the set. Stay tuned to The Knight’s Lance for more.