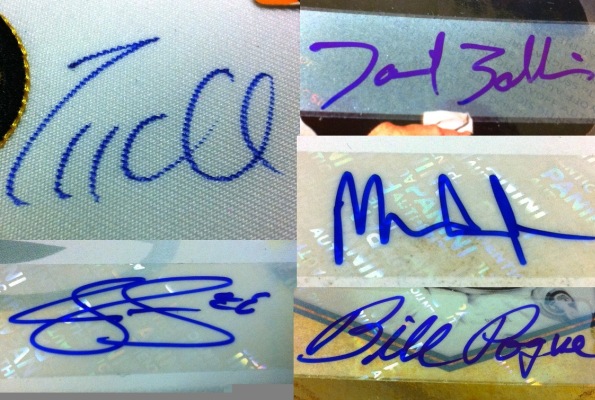 Finally, after almost three months away, we’re ready to launch our fifth “Guess the Autograph” contest . . .

In the almost 10 months since we launched The Knight’s Lance, we’ve produced several posts that have been popular with the blog’s loyal readers. From behind-the-scenes looks at the trading card process that you just won’t get anywhere else to exclusive first looks at Panini America’s best products, we seem to have struck a chord with today’s collectors.

But some of the most popular posts of all have been our orignal autograph-guessing contests that challenge readers to accurately guess the identities of a handful of Panini America’s recent autograph arrivals in an effort to win some great prizes.

In fact, they’ve been so popular that we decided long ago to make the contest a regular feature of the blog. For easy reference, check out the results of our most recent installment.

Finally, after almost three months away, we’re ready to launch our fifth “Guess the Autograph” contest . . .

Below are 12 mostly unidentified autographs — from the worlds of basketball, football, hockey and entertainment — that have arrived at company headquarters in recent weeks or that have already made their way into a product. Your job is to identify them.

In the past we’ve included subtle clues with some of the signatures, but since the last few contests didn’t seem to pose much of a challenge, this time around we’ve provided only the depicted signer’s noted area of expertise.

Simply provide your answers as a comment to this post. We’ll give you through the weekend to respond and the person who identifies the most autographs correctly will win a Panini America prize package that includes four certified autograph trading cards (one each from the NFL, NBA and NHL) and a box of Panini America trading cards.

(In the event of a tie, one winner will be drawn at random from all correct entries received. We’ll wait until the contest ends to approve all submissions and select the winner; no need to let everyone see everyone else’s answers.)

You have until 11:59 p.m. (CST) Sunday, August 21, to get your entries in. Now as always, good luck and thanks for participating.