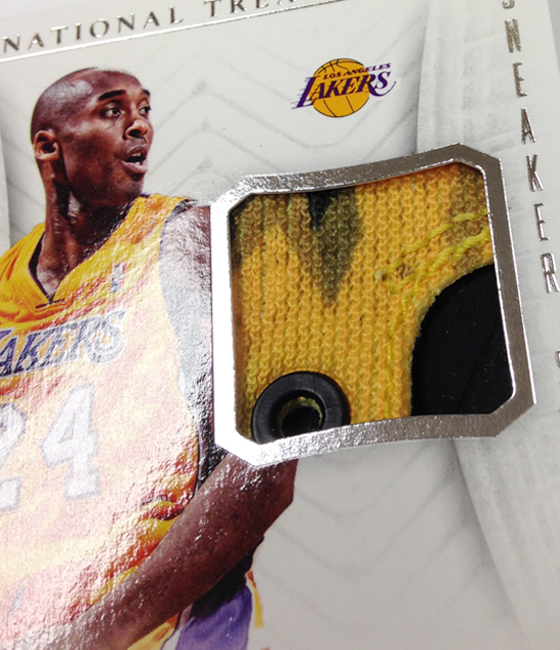 Since the dawn of the game-worn memorabilia era in modern trading cards roughly 20 years ago, just about everything that can be worn or used in a professional game has been cut up and incorporated into trading cards. Jerseys. Pants. Gloves. Helmets. Face masks. Skates. Sticks. Balls. Pucks. Cleats. Bats. Bases. Towels. But for any number of valid reasons, the jersey has become the predominant memorabilia piece of choice.

But when Panini America’s 2013-14 National Treasures Basketball releases next week, company officials will place a long-overdue extensive focus on some of the most talked-about and fashionable pieces of memorabilia in professional sports: Game-worn NBA kicks.

Game-worn sneaker cards have been done on an extremely limited basis before. In fact, Panini America has featured them as rare inclusions in promotional sets such as Black Friday and Father’s Day for the last three years. But with the Sneaker Swatches insert in 2013-14 National Treasures Basketball, company officials are raising the bar considerably with a 35-card unsigned set and a 25-card autograph set — both incorporating extra-thick pieces of game-worn basketball shoes from some of the NBA’s biggest superstars.

The first thing you’ll notice about Sneaker Swatches is the uniqueness of the shoe piece that provides a refreshing contrast to even the most multicolored prime jersey patch. After that, you’ll likely marvel at the sheer girth of the cards themselves, which offers a tangible reminder of just how different processing shoe leather is as opposed to a standard game-worn jersey.

But if you’re like all of us here at Panini America, we think you’ll marvel at the results. Collectors can expect similar cool ideas to follow closely in Sneaker Swatches’ footsteps — beginning with the unique Sneak Peek and Sole of the Game inserts in 2013-14 Immaculate Basketball. But today, let’s appreciate the foot-stomping beauty of Sneaker Swatches.