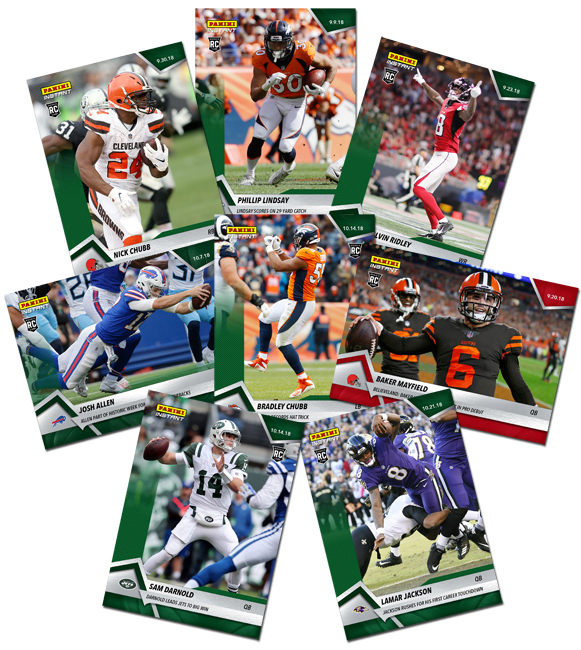 Through the first half of the 2018 NFL season, the rookie class has been flying high, something not seen in generations. Just like the 1983 group, arguably the greatest draft class ever, this year’s bunch has taken the league by storm, proving that skill can overcome inexperience.

Through the first half of the 2018 NFL season, the rookie class has been flying high, something not seen in generations. Just like the 1983 group, arguably the greatest draft class ever, this year’s bunch has taken the league by storm, proving that skill can overcome inexperience.

“I would say the hype coming in with this class was high, and just after the draft was even higher, because we had a record-setting class with how many QBs went in the first round and a running back going No. 2, which is the highest a running back has gone in a while,” said Panini America Senior Director of Product Development Nick Matijevich. “Traditionally in trading cards going back all the way to the 1950s, the Rookie Cards have been the big driver. They are the ones that have the most value because it’s the first card of any guy.”

Not only has this class exceeded expectations on the field, but this talented troupe of fresh-faced athletes brings a lot to the table off the field, boasting a host of colorful characters who beat the odds to become pros. Here’s a look at some of those budding stars and why it’d be wise to chase their Panini America trading cards. 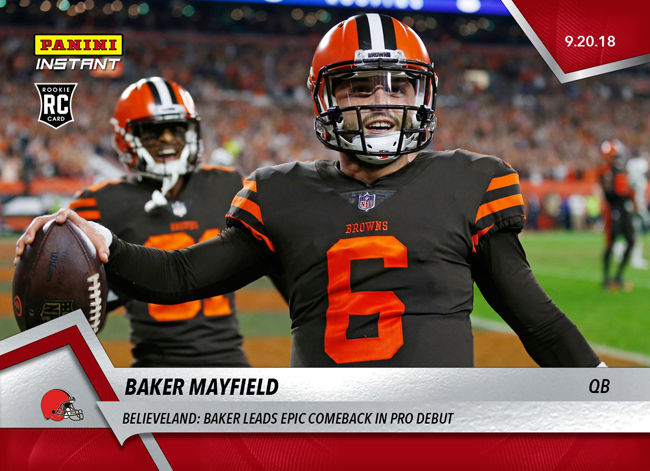 Five-Star Field Generals
The 2018 NFL Draft saw five quarterbacks go off the board in the first round. Coincidentally, there were six in 1983, including three Hall of Famers. This year, a new class of quarterbacks has a chance to achieve greatness. Commencing his career in record-breaking fashion, Sam Darnold earned the title of youngest quarterback to start opening week, doing so at 21 years and 87 days old. During Week 1 against the Lions, he became the first quarterback in Jets history to throw multiple touchdowns in his debut. Weeks later, the signal-caller flashed his running ability, becoming the first Jets quarterback to rush for at least four first downs in a game.

Ignored by the major Division I programs out of high school, the duo of Josh Allen and Baker Mayfield beat insurmountable odds and made it to the NFL. Mayfield led the Browns to their first victory since 2016 in his first appearance, a meeting against the Jets. Allen instantly brought promise to a Bills organization in need of a savior at quarterback, becoming the first quarterback in franchise history since 2008 to rush for two touchdowns in an upset victory over the Vikings.

Ravens QB Lamar Jackson picked up steam in two consecutive weeks, posting his first rushing touchdown vs. New Orleans in Week 7 and his first score through the air against the Panthers in Week 8.

Running With the Rookies
In a league where teams typically take a committee approach to their running game, a group of rookie rushers marched to the forefront, proving to be bell cows. Giants tailback Saquon Barkley’s jersey is currently the NFL’s best-seller, and he has been a hot ticket off the field. Why wouldn’t you want to get this guy’s memorabilia or cards? His personality is magnetic, and he’s a baller on the gridiron.

“Saquon’s been the most collectible rookie, which is unique,” said Matijevich, who’s been a veteran of the sports trading card industry for 20 years. “The interesting thing with him is normally in a draft like this where you have four quarterbacks go in the top 10, five in the first round, the quarterbacks are going to be the driver. I think a mix of his college market and pro market have made him so popular.

“The Giants have a rabid fan base. Penn State’s got a great fan base; they both collect. A lot of it comes down to the market these guys end up.”

In the season opener against Jacksonville, the tailback became the first rookie in franchise history to rush for at least 100 yards. Continuing his excellence in Week 2, the ball-carrier then tied the NFL record for most receptions by a rookie with 14. Barkley showed he can air things out during the 2018 NFLPA Rookie Premiere Presented By Panini America. He then put those skills to use during a game against the Panthers. With several weeks left in the 2018 season, Barkley has a chance to join Marshall Faulk and Roger Craig as the only players in NFL history to rush for at least 1,000 yards and tally at least 1,000 receiving yards. 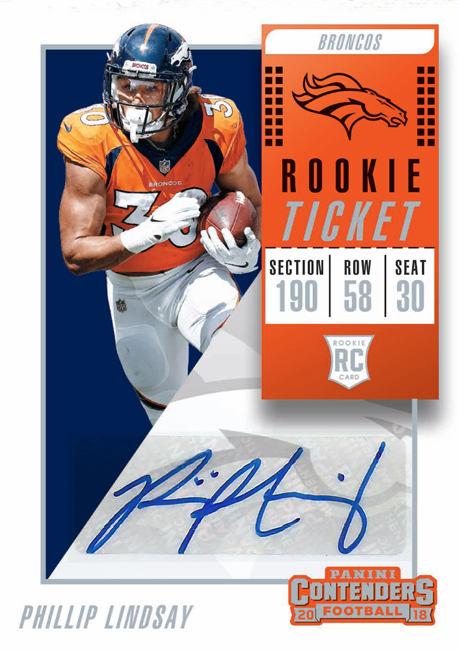 This next story is one of the feel-good variety. Broncos tailback Phillip Lindsay, a Colorado native and the first player from Denver’s Futures Football program (a middle school program) to go on to play for the team, became the first undrafted rookie in team history to catch a touchdown pass in his debut, a matchup vs. Seattle. Etching his name in the record books yet again in Week 2 vs the Raiders, the ball-carrier became the first undrafted rookie in NFL history to tally at least 100 yards from scrimmage in each of his first two games.

Not to be outdone by his rookie classmates, the Browns’ Nick Chubb authored the first 100-yard rushing game by a Cleveland rookie since 2014 during a Week 4 contest vs. the Raiders. The crazy thing about that game is Chubb did it in just three rushes. Weeks later, he took over the team’s starting gig. 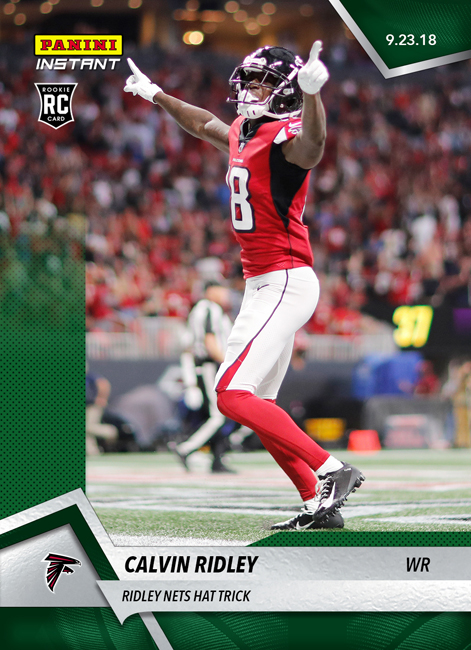 Wonderful World of Wideouts
This isn’t your old-school, pound-the-rock football anymore. In 2018, teams covet wide receivers who can run the entire route tree. Luckily, the 2018 class featured a couple of polished pass catchers. Starting off his career with a bang, Falcons wideout Calvin Ridley tallied six scores in the team’s first four games.

Don’t sleep on Arizona’s Christian Kirk, who united with longtime friend and fellow rookie Josh Rosen with the Cardinals. Proving to have a solid rapport with Rosen, the wide receiver hauled in his first career touchdown in Week 5 against the 49ers and the game-winning snag vs. San Francisco in Week 8.

Defensive Dandies
With so many schemes to memorize and a set of rules differing from college, it’s not easy for rookie defenders to earn playing time. The 2018 defensive class didn’t seem to notice, with many hitting the ground running. Following in the massive footsteps of Bears legends Dick Butkus, Mike Singletary and Brian Urlacher, Roquan Smith quickly assumed a leadership role as the new head of the Monsters of the Midway. Against the Dolphins in Week 6, the rookie registered his first double-digit tackle outing, tallying 13.

The Colts unearthed a gem with second-rounder Darius Leonard. Through the first eight weeks of the season, the linebacker led the league in tackles with 88, signed his name next to a few Colts records and assumed the role as the leader of Indy’s defense. Cowboys linebacker Leighton Vander Esch ranks second on the team with 54 tackles. Inside the trenches, Broncos rookie Bradley Chubb has already solidified himself as a monster. Entering Week 9, he led all rookies in sacks (7.0), including a trio of takedowns against the undefeated Rams in Week 6. He’s also the cousin of Browns running back Nick Chubb — a heckuva bloodline. 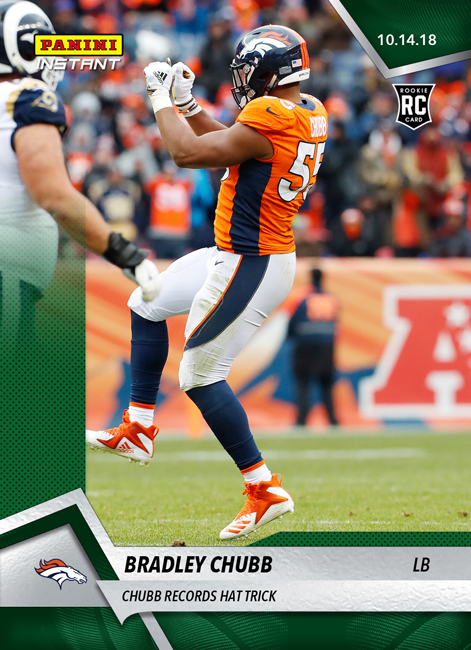 “Bradley [Chubb] has sold great; Bradley’s done really well,” Matijevich said. “The other guys have done well. Typically in a defensive year this is the way it works: You have one guy who really takes off and you have some really solid players. T.J. Watt last year was a guy who really took off. With defensive guys, (on-field) production coupled with the market are usually the biggest things.”

In the secondary, there have been some rookies who have made the leap from college to the pros look seamless. Cleveland cornerback Denzel Ward christened his professional career by tallying two picks against the Steelers in the season opener. Chargers defensive back Derwin James has been a nightmare for quarterbacks. He’s already tallied more sacks (3.5) than any safety in 2017 and earned his first interception in Week 3 vs. the Bills.

Rookies have clearly been all the rage in 2018, and you should get their cards now before they continue to grow hotter. There’s nothing better in the world than a Rookie Card of a guy who’s a future All-Pro or even a Hall of Famer. With fabulous Panini America programs on the horizon such as Immaculate, Playbook, Contenders and Donruss Optic, collectors better act fast. And don’t forget you can always snag your favorite rookies in real-time with exclusive Panini NFL Instant cards.

Robert Halliman is a Staff Writer for Panini America.