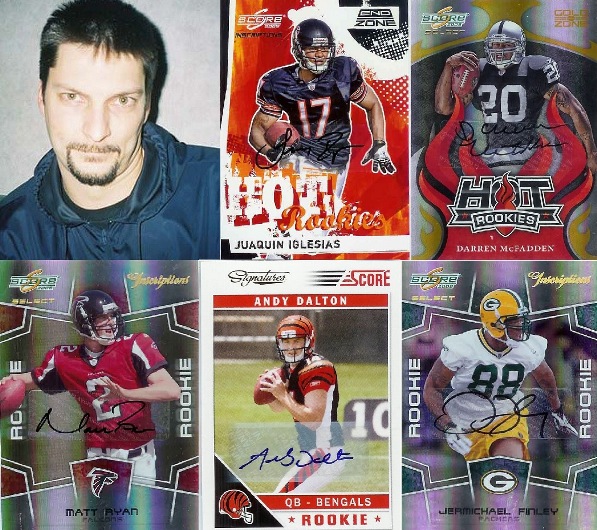 First things first: I've been sitting on this Panini America Personal Collection Spotlight entry from Pennsylvania collector Ken Wagner for more than a year. I had the best of intentions to run it long, long ago, but for any number of reasons, I never did.

First things first: I’ve been sitting on this Panini America Personal Collection Spotlight entry from Pennsylvania collector Ken Wagner for more than a year. I had the best of intentions to run it long, long ago, but for any number of reasons, I never did.
That’s my bad. There’s no question that Wagner’s impeccable collection of Score and Score Select Football autographs spanning the last decade-plus is worthy of a fitting showcase. Today, we present the long overdue tribute to one of the country’s preeminent Score keepers.

Panini America Personal Collection Spotlight
Who: Ken Wagner, Pennsylvania
What: Score Football autographs, including Hot Rookies, Inscriptions and more
“I first started collecting — well, if that’s what you called it back then — in the late 1970s and through the 1980s. My memories of those days are of buying mostly baseball card. Being a kid, I did the unthinkable. I loved the Pirates and Yankees and a lot of the cards I got my hands on back then would end up being glued together, back to back, with a punch hole in the top and with some fishing line through the hole to make a card mobile that would hang in my bedroom. I remember seeing Willie Stargell, Omar Moreno, Ron Guidry, Bucky Dent and so forth swinging from my ceiling. Those were the days when cards were cards and you didn’t worry about book values and such.
“When I hit high school, my focus shifted to playing music and lost interest in cards so I lost many years of building my knowledge of the collecting industry and how it had grown. Flash forward to 2006. I met a girl who now is my wife and she had a son who collected a little bit of football and baseball cards. I decided to start collecting again to have something to do with him. You can imagine my surprise when I stepped back into the card world and saw all the different products that were out now, from low end to high end. I had no idea. When looking for a set I could easily start collecting with my step-son, I wanted something that wasn’t expensive. I noticed Score football and decided to give it a try.
“I like to consider myself a set collector and Score is quite a set to build. I bought and bought until I amassed quite a number of cards and I really liked the parallel sets within Score (Scorecard, Gold Zone, Red Zone, End Zone, Artist’s Proof) and, of course, the insert sets as well (Hot Rookies, Franchise, etc.). I don’t know why I really liked them because they’re not really that different from the base set. Now, in 2007 I discovered Select and from there on out I was hooked. Something about the foil and some of the color variations really caught my eye. I still tried to build the main sets of Score and Select but now my focus was primarily on the parallels and inserts. I really didnt focus on the autos as much then, coming one per box made it kind of hard to build a collection.
“But then 2008 Score Select comes along and now there are three autos per box and I had become an avid trader on an online trading site called Trading Card Central. That made it a little easier to aquire more of my wants and add a little more of the autos to my collection. In 2009, there was no more Score Select but a new version called ‘Inscriptions.’ Man, I was bummed. I wasn’t thrilled about it at first but over time it slowly grew on me and I decided to go full force on trying to get not only the parallels and inserts from all the previous years, but also adding the autos as well. Here I am today with a collection that I am proud of and am still trying to expand.
“Most of my additions these days come through online trading so they come in slow but I am still adding. I really like the design of the 2008 cards but some of my personal favorite autos I have are the 2008 Select Darren McFadden Hot Rookies Gold Zone auto ( being a Raiders fan, this one is near the top), 2008 Select Matt Ryan auto ( one of the best sigs in football I believe) and 2009 Inscriptions Juaquin Iglesias Hot Rookie End Zone auto (just a cool looking card).
“Like I said, I am slowly building up the auto section of my PC because my main focus had been on the parallels and inserts. Score might not be the most expensive cards out there, but they sure got me hooked into collecting again. Thanks to everyone for taking the time to check out my collection made the old fashion way: Purely on the love of collecting and not on the value of it.”