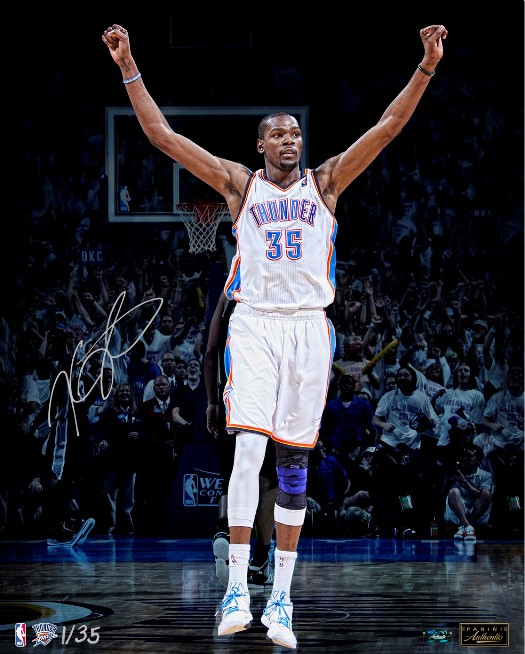 He didn’t do it with one of his signature gliding dunks. It wasn’t with a nothing-but-net contested 3-pointer, or even a difficult finish at the rim with bigger defenders looming. No, Kevin Durant tallied his 15,000th point with a shot he’s gleaned in recent years from sure-fire Hall of Famer Dirk Nowitzki. Taking the ball at the right elbow early in the first quarter of a December game in Sacramento, Durant dribbled twice before knocking down the one-legged fadeaway. That’s what you do when you’re the league MVP.

He didn’t do it with one of his signature gliding dunks. It wasn’t with a nothing-but-net contested 3-pointer, or even a difficult finish at the rim with bigger defenders looming. No, Kevin Durant tallied his 15,000th point with a shot he’s gleaned in recent years from sure-fire Hall of Famer Dirk Nowitzki. Taking the ball at the right elbow early in the first quarter of a December game in Sacramento, Durant dribbled twice before knocking down the one-legged fadeaway. That’s what you do when you’re the league MVP.

The jumper made Durant, at the age of 26 years and 78 days, the second-youngest player to tally 15,000 points. Only LeBron James, who came straight to the NBA from high school, reached the milestone quicker, doing so in 25 years and 79 days.

For a moment, let’s not forget Durant missed the first 16 games of the 2014-15 season with an injury that has plagued promising careers across the sports spectrum. Don’t think for a second Thunder fans have let that slip from memory. Durant might have claimed his mother was the real MVP in his 2013-14 acceptance speech, but Oklahoma City needed to experience just six weeks without the high-scoring forward to know the voting process made the right call.

When Durant was out the Thunder struggled – a true understatement. It wasn’t smooth sailing like in years past.

The Thunder had just dropped their sixth consecutive game on Nov. 23, 2014, a 91-86 defeat to Golden State, and was stuck with a 3-12 record. To make matters worse, Durant and fellow All-Star Russell Westbrook, who suffered an injury in the second game of the season, had seen more time in tailored suits than Thunder blue. In the powerful Western Conference, the writing appeared on the wall for the team to miss the playoffs for the first time since 2008-09, its inaugural campaign in OKC.

Without those two stars on the court, players seemed lost. They no longer were seeing easy shots that they were accustomed to getting.

Ibaka thrived on the court when opposing defenses paid so much attention to Durant and Westbrook. But that quickly changed. One of the league’s highest scoring teams became one of the most inept offensive attacks.

“They will be back soon and we will be whole once again,” head coach Scott Brooks said in early November. “When that happens, everyone will fit into their roles.”

A whopping seven games out of the eighth seed (and according to John Hollinger’s mathematical playoff predictions on ESPN with a 0.9 percent chance of making the postseason), the Thunder’s fortunes began to change.

Westbrook returned on Nov. 26 against Utah and led the club to back-to-back victories before Durant made his season debut on Dec. 2 against New Orleans. The Thunder would drop his first game back, but Durant showed no signs of being hampered by the foot injury that he suffered in early October.

While some players might be tempted to take it easy in their return to the court, especially when your feet are involved, Durant put the pedal to the metal. Against the Pelicans and their rim-protectors like Anthony Davis and Omer Asik, Durant took 14 of his 25 shots in the paint, hitting eight of those attempts to effectively signal that timidity would not be a part of his post-injury game.

In his fifth game back, Durant put in a vintage KD-type of night, scoring Oklahoma City’s final eight points in less than two minutes to lead the Thunder to a 103-94 victory over the Cavaliers.

“That’s what he does when the game is on the line,” Brooks said. “He’s wired that way. That’s why he is the MVP. He does that every night. Tonight, you can see he’s getting his rhythm back and he closed the game for us.” 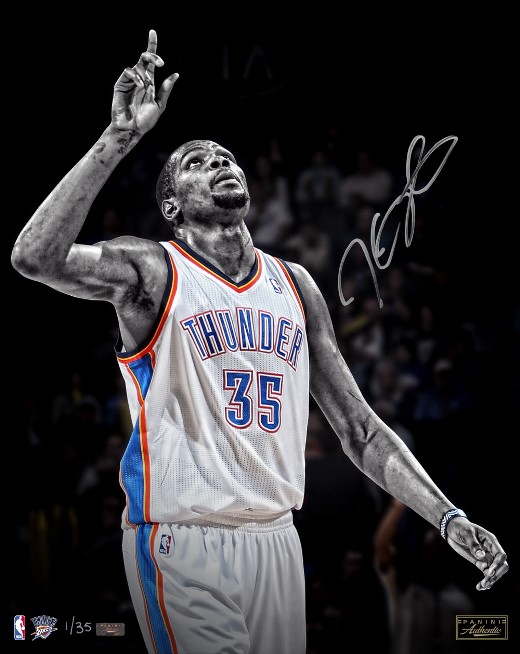 Limited to 30 minutes a night during his first seven games, Durant still poured in 20.9 points per game. To put that number in perspective, only six players in NBA history have managed to average 20 points in fewer than 30 minutes per game in a season, including Hall of Famers George Gervin and Clyde Lovellette.

The training wheels were officially off in a rematch against Golden State on Dec. 18. Durant posted 30 points in just 19 minutes of action. He made it look easy, and folks on Twitter and social media were taking note.

The OKC star put on a video game display right out of “NBA Jam” by hitting 10-of-13 shots, including 5-of-6 from downtown. With the performance he became the first player since the NBA-ABA merger to tally 30 points in less than 20 minutes. Even more, he did it against the best defensive team in the league.

With its best player back on the court, Oklahoma City quickly regained its spot among the league’s elite. At one time feeding at the bottom of the West, the Thunder roared back with a 5.5-game swing in the standings in a two-week span, which is a rare feat in the NBA or in any sport.

Following Durant’s 44-point outburst in a thrilling 137-134 overtime defeat of Phoenix on New Year’s Eve, the Thunder were just a game out of the 8th seed in the loss column. And Durant seems poised to start making 30- and 40-point nights the routine, as he has each of the last five seasons in leading the NBA in points scored. That’s obviously not going to be the case this season, with Durant missing 23 of the team’s first 33 games, but know what? The goal isn’t scoring crowns or even regular-season MVP awards. It’s winning a championship and taking his place among the game’s all-time greats.

Letting off the gas isn’t an option for the Thunder. Even as one of the top teams in the league, OKC still has plenty of competition in the uber-competitive Western Conference. Still, at this point, no one would be surprised if Durant, Westbrook and company go streaking, and we’re not talking Will Ferrell in Old School, we’re talking 10, 11 straight, maybe a 20-2 run to celebrate the New Year. Whatever the case, Oklahoma City is going to be a force the remainder of the season for one simple reason.

Kevin Durant has returned. And he certainly looks a lot like that MVP from a season ago. And looking ahead, the 26-year old is going to be more rested than any previous postseason. Scary thought for the competition.

MVP-Type Numbers
It’s no secret that Kevin Durant is one of the most collectible players in the modern sports card era. His best Panini America cards continue to draw chart-topping, jaw-dropping returns on the secondary market. Here are five recent examples . . .

9 Replies to “Kevin Durant’s Return to MVP Form Could Find Thunder, Reign in the Forecast”