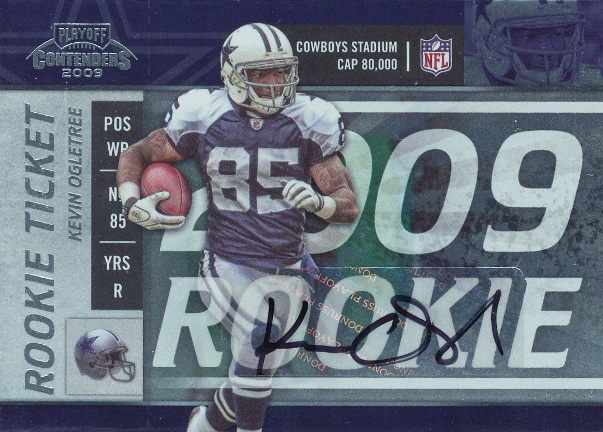 Many diehard Dallas Cowboys fans bemoaned the free-agent defection of wide receiver Laurent Robinson to the Jacksonville Jaguars this past offseason, apparently skeptical of the team’s pass-catching depth behind veteran tight end Jason Witten and the sometimes-fragile Miles Austin and Dez Bryant.

All he did last night — in front of a national television audience — was reward Romo’s faith with a career performance that included 114 receiving yards and two touchdowns in Dallas’ stirring 24-17 victory.

Truth be told, Panini America officials know exactly how Romo feels. The company has been on the Ogletree bandwagon since 2009 when it produced the suddenly rising star’s only NFL-licensed Rookie Cards. All told, Panini America produced 13 different RCs of Ogletree across their roster of products in 2009. And in the hours since last night’s game, seemingly every last one of them has vaulted in value.

One of Ogletree’s best Rookie Cards — an autographed gem from 2009 Contenders Football — is currently valued at $20 by the pricing experts at Beckett Media; but as recently as late July, a copy of that card sold on eBay for just 99 cents. Last night, while Ogletree was lighting up prime time and stealing eyeballs away from the Democratic National Convention, a copy of that same card sold for $59.50, or almost three times current book value.

Other Ogletree Rookie Cards have shown similar meteoric jumps in value. His autographed 2009 Certified Gold card limited to just 25 copies(valued by Beckett Media at $15) sold last night for $70; just hours earlier, a copy of that same card sold on eBay for less than $19.

It’s another shining example of just how volatile, surprising and fun the sports card hobby can be. And it’s not likely to slow down any time soon, especially if these types of performances continue. In honor of Ogletree’s tremendous start to the 2012 season, here’s a must-see gallery of Ogletree’s best Panini America Rookie Cards.