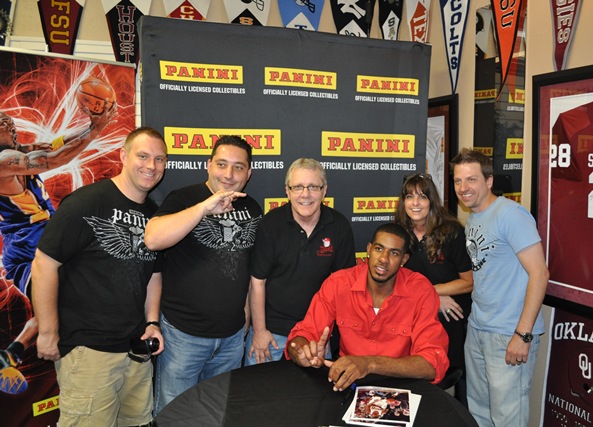 Fun for us! Thx for jumping on!

Thanks for jumping on! 🔥

The NBA and Panini America also teamed up for a special Saturday appearance by highly touted former Duke guard Kyrie Irving at Bases Loaded Sports Cards in Miami. We’ll have complete coverage of that appearance in the coming days.

“I thought it was a great experience,” said Scott Pierce, owner of SMP Sports Cards. “Anytime you get stuff to your customer at no — autographs, a player appearance, food — that is just a win situation for a hobby shop. Period.

“We had a good turnout and we kept Derek — who was just great — busy the whole hour plus. I thought it was very successful. The No. 1 thing for us is taking care of customers and this event certainly enabled us to do that.”

“It was awesome . . . just so cool,” Redwine said. “The highlight for me was how much fun everybody had. We’re a small store and we were jam-packed. We had well over 100 people here. Everybody just had a great time. And [LaMarcus] was awesome. He was beyond awesome. He was so gracious and took time for everybody. It was really a lot of fun.”

For just a glimpse of the good times, enjoy this brief video and the gallery that follows. Stay tuned to The Knight’s Lance in the coming days for more coverage of the events, including exclusive interviews with Aldridge and Irving, and a recap of the event at Bases Loaded in Miami.