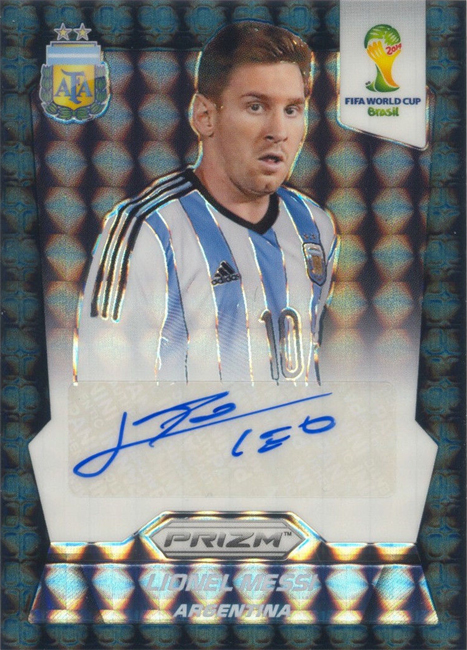 With two more goals Wednesday in Argentina's 3-2 victory over Nigeria during the team's final game of group play, international superstar Lionel Messi inched his way past Neymar and into the lead for the prestigious 2014 FIFA World Cup™ adidas Golden Boot Award. But just two days earlier, Messi claimed card collecting's version of the Golden Loot Award -- by a landslide.

With two more goals Wednesday in Argentina’s 3-2 victory over Nigeria during the team’s final game of group play, international superstar Lionel Messi inched his way past Neymar and into the lead for the prestigious 2014 FIFA World Cup™ adidas Golden Boot Award. But just two days earlier, Messi claimed card collecting’s version of the Golden Loot Award — by a landslide.
A one-of-a-kind Messi autograph trading card from Panini America’s 2014 FIFA World Cup Brazil™ Prizm trading card set sold on eBay for an astounding $13,899. The realized price for the rare Black Prizm version of Messi’s autograph in the set — numbered 1/1 on the back —  is believed to be the most ever paid for a modern-era soccer trading card.

The card was originally pulled on June 10 from a $5 pack of 2014 FIFA World Cup Brazil™ Prizm trading cards purchased at Sports Source in Burbank, Calif. The card was listed for sale on eBay one day later with a Buy It Now price of $24,999 — and it began generating significant buzz in the trading card industry in the days afterward. On Monday, the seller accepted a Best Offer of $13,899.
“It was one of our good customers that comes into the store everyday who pulled the card,” says Dave Rodriguez of Sports Source. “He’s opened maybe two cases of the product at the most — every few days he’d come in around lunchtime and buy a box. I happened to be sitting with him when he opened that particular box. The only other person in the store at the time was Robert DeSantis, the owner.
“The customer was opening a pack from the box and at first we saw some black — and we paused. Then we saw some light-blue and white — Argentina colors — and we paused again. He slid the card a little more and he saw ‘Messi.’ His jaw dropped. At that point, we both realized he was holding arguably the best card in the entire product. He was pretty jazzed. He normally doesn’t get that excited — but he got pretty excited. I had to calm him and his blood pressure.”
Rodriguez says the card ranks as the single best card pulled in the two-decade history of Sports Source. The lucky customer, who doesn’t wish to be identified, is a soccer fan who wrestled with the decision to sell the card. But in the end, the curiosity of what could be won out and he let Rodriguez list the card on eBay.
The card received more than 20 total offers during its run on eBay, including one preposterously low — and seemingly farcical — $10 offer. Given the international appeal of the FIFA World Cup™, it should come as little surprise that the winning offer of $13,899 came from overseas — from a trading card store owner in Taiwan.
“Who knows,” Rodriguez notes, “maybe Argentina will win the World Cup and the guy buying it will capitalize and sell it for twice as much.”
Since releasing in May, the best autograph cards from Panini America’s inaugural FIFA World Cup™ trading card set have delivered a string of staggering sale prices every bit as impressive as Messi’s four 2014 FIFA World Cup™ goals to date. Eight cards from the set have sold for $2,300 or more, headlined previously by the $5,000 paid for a card limited to 25 copies and featuring autographs from Portugal star Cristiano Ronaldo and Brazilian legend Pele.
Stay tuned to The Knight’s Lance for continued coverage of the record-smashing sale of the Messi card. 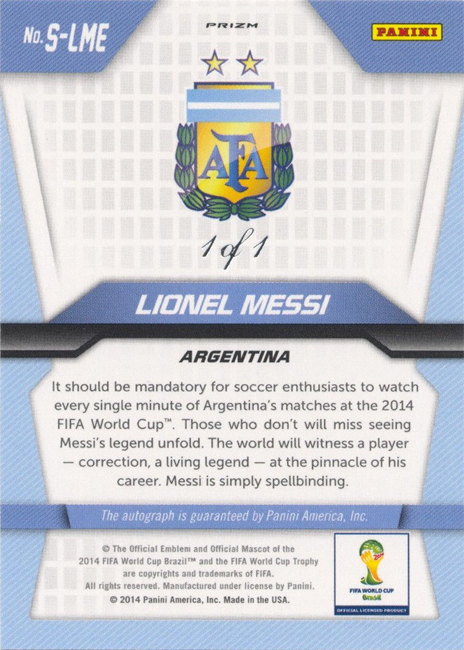