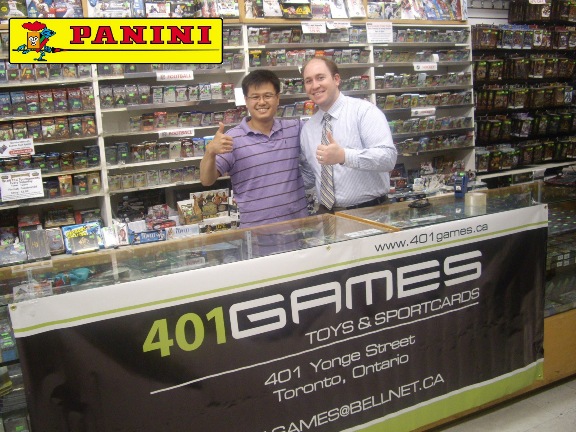 2010-11 Panini NHL Player of the Day Sweepstakes winner’s prize includes a private party, shopping spree and a free autograph session for the community at 401 Games, Toys and Sportscards.

TORONTO, ONTARIO – Joel Silverman, an avid NHL trading card collector from Thornhill, Ontario turned one lucky pack of Panini trading cards into one fantastic grand prize:  The chance for him, his friends and family to spend the day with Toronto Maple Leafs Center Nazem Kadri.

A passionate Maple Leafs fan and collector, Silverman beat the odds and was picked from more than 100,000 NHL card collectors who participated in the 2010-11 Panini NHL Player of the Day promotion at more than 250 hobby shops across the U.S. and Canada during March and April.  He is among the thousands who earned prizes, but as the Grand Prize winner, the 25-year-old Maple Leafs fan will spend a day with an NHL player.

The fun-filled grand prize day will begin when Kadri attends a private party for Silverman’s family and friends at his parents home in Thornhill.  After the party, Joel and his friends will take a limousine with Kadri to his favorite hobby shop – 401 Games, Toys and Sportscards (401 Yonge Street Toronto, ON M5B 1S9 #416-599-6446).  There, the community will join in as winners when Kadri spends an hour (2:00-3:00 pm) signing free autographs and posing for photos.

“I would like to congratulate Joel and 401 Games, Toys and Sportscards for being the lucky winners of the 2010-11 Panini NHL Player of the Day hobby promotion,” said Jason Howarth VP of Marketing for Panini America. “We relish the opportunity to bring our loyal customers up close and personal with their favorite players, creating unforgettable memories for passionate NHL trading card collectors and fans.”

As part of his prize package, Joel will also receive a $250 shopping spree to spend on Panini product.

Joel’s journey began when he uncovered the designated Panini NHL Player of the Day from a pack of cards he purchased at the hobby shop.  He was then selected as the grand prize winner from all the winners at his local shop.  Upon being entered into the national sweepstakes along with 250 other entrants, he was randomly chosen as the grand prize winner.