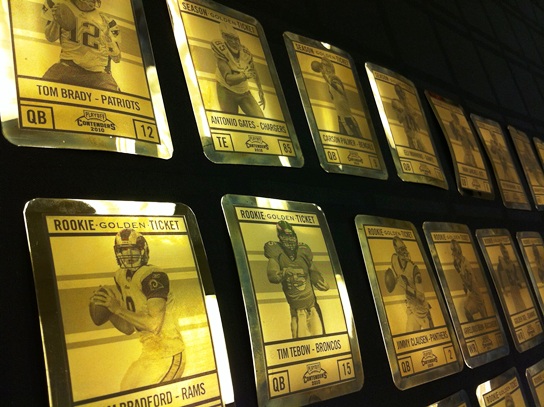 It's been a week since 2010 Playoff Contenders Football hit the streets packing more product-of-the-year potential than any sports trading card release in recent memory.

Despite the considerable buzz generated by Contenders’ ballyhooed Rookie Ticket variations and the mystery surrounding their respective quantities, the real shining element in the product has been, well, the ultimate shining element: Redemptions good for one of 52 Golden Tickets, the industry’s first 14-karat gold trading cards.

The first Golden Ticket hit the market late last Wednesday night, igniting an absolute bidding frenzy earmarked by routine four-figure sale prices, online gawking and the type of intense, industry-wide chatter that’s worth its weight in . . . gold. Preliminary transactions, however, would seem to indicate that the cards themselves are actually worth more than their weight in gold (in this case 11 grams of gold per card).

But don’t take our word for it. Check out the short list of confirmed Golden Ticket eBay sales so far:

In the coming days and weeks, these impressive numbers are sure to grow, what with auctions for Golden Tickets of Philip Rivers and Dexter McCluster currently sitting at $747.76 and $610, respectively. In addition, we have confirmed that the Tim Tebow Golden Ticket was pulled in, of all places, Colorado.

Stay tuned to The Knight’s Lance for complete coverage of the continuing hysteria surrounding the revolutionary Golden Tickets.