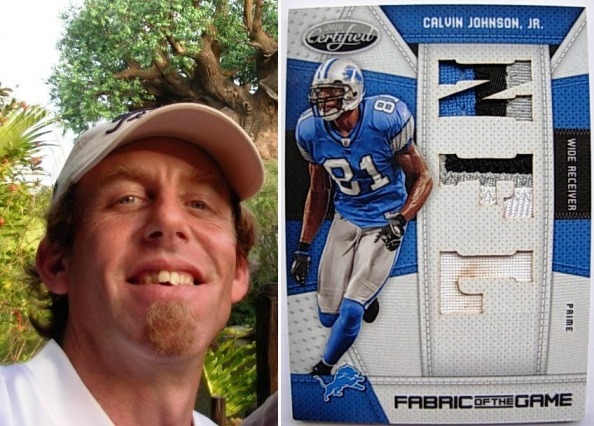 When Oregon-based collector Jeff Stoller -- AKA "chibearsboy" on the Beckett.com message boards -- made the decision years ago to start collecting prime memorabilia cards, his next mission was to pinpoint that one perfect set target.

When Oregon-based collector Jeff Stoller — AKA “chibearsboy” on the Beckett.com message boards — made the decision years ago to start collecting prime memorabilia cards, his next mission was to pinpoint that one perfect set target.
It didn’t take him long to find the perfect goal.

“I wanted to do a good set, a beautiful set,” Stoller said recently via email. “I started with the 2007 Certified Football Fabric of the Game set. When I saw the checklist of 134 cards and the white background of the set, I fell in love.”
In the years since, Stoller has completed a staggering 96.3 percent of that behemoth and now sits just five cards shy of all 134. But a funny thing happened on his way to finishing 2007: He met the FOTG lineup from 2010.
A new collecting mission was born for the concrete-pouring card purveyor.
“When I saw all of the old-school players like Joe Perry, Bart Starr and Jim Brown with the wonderful white card stock, I knew I had to try this bad boy — never realizing the print runs were in the low single digits,” Stoller said. “After I found the Steve Smith 1/1, I thought I had a chance to complete this if I found the Tom Rathman 1/1.
“I saw a YouTube video of the Rathman and started working on it and with some incredible help from some wonderful Beckett members, I was able to attain it. It was the fifth to the last one I picked up. But I am really only the adoptive parent of this beautiful set. It’s Panini America’s baby.”
The final numbers for Stoller’s 2010 FOTG set: Two 1/1s, two numbered to two, one numbered to three, one numbered to four, 23 numbered to five, nine numbered to 10, one numbered to 12, two numbered to 15, one numbered to 20 and 61 numbered to 25.
Congratulations, Jeff. We truly appreciate your passion. We also appreciate you sharing some of the favorite images from your 2010 Certified Football Fabric of the Game insert. Special thanks to fellow collector Ryan Fogle — AKA “3lilcraziesdad” — for tipping us off to your masterpiece.