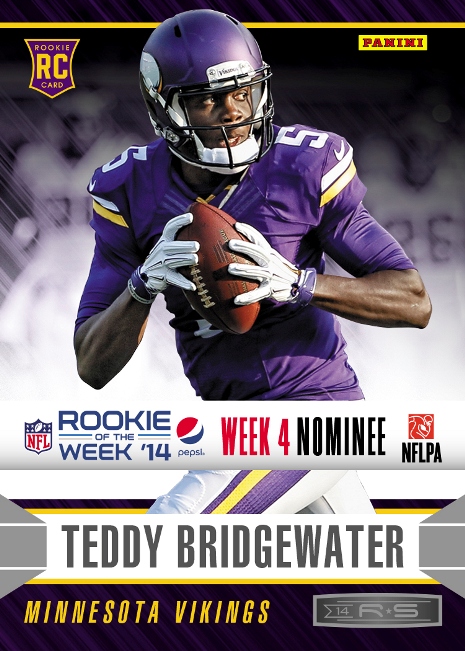 We love NFL rookies at Panini America. We love interacting with them at the NFLPA Rookie Premiere every summer. We love the fact that with their potential and their performances, they drive sales of every NFL product we make every year. But you want to know who loves NFL rookies as much as we do? Pepsi and football collectors.

Indeed, the folks at Pepsi get just as excited we all do about NFL Rookie performances each week during the season. And that’s exactly why once again this season, for the fourth straight year, Panini America and Pepsi have joined forces to help promote Pepsi NFL Rookie of the Week voting and Panini America NFL Rookie Cards.

Fans can vote for the Pepsi NFL Rookie of the Week each week during the 2014 NFL regular season. After you vote, be sure to share the virtual card image of the Pepsi Rookie of the Week Nominee you voted for on Twitter. Be sure to mention @PaniniAmerica to be eligible to win prizes throughout the season.

We’ll have more details as the season progresses. But for now, here are your Week 4 nominees for 2014 Pepsi NFL Rookie of the Week: