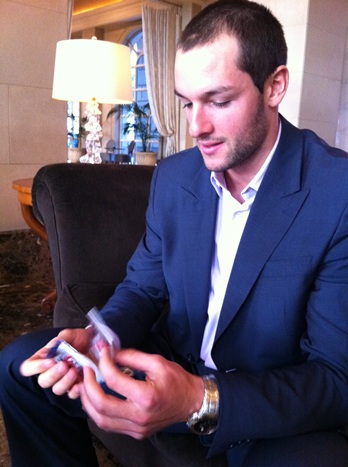 On Thursday afternoon, during a stop through Dallas to play the Stars, Bernier got the long-awaited first look at his 2010-11 Certified and Score cards.

“You guys coming into the picture is great news and I’m excited to be a part of it,” Bernier said.

While busting a few packs with Panini America Licenses Acquisitions Manager Alex Carbajal at the team hotel prior to the Kings’ 5-2 victory over Dallas, LA’s puck-stopper of the future – and, perhaps soon, of the present – took time to answer a few questions.

The Knight’s Lance: Were you much of a collector growing up as kid?
Jonathan Bernier: I had a few cards but I wasn’t really the type of guy that was putting those cards in the book and stuff like that. I had a few, but I wasn’t a big collector.

TKL: Since you’ve been in the league, have you collected any of your own cards?
JB: If I have some, I try to give them away to my family or friends.

TKL: How does it make you feel that there are collectors across North America who covet your autograph cards enough to spend big bucks on them?
JB: I think it’s great. You always dream as a kid to have a card when you’re older and I guess when you see one the first time it’s a pretty amazing feeling.

TKL: What does the perfect Jonathan Bernier trading card look like? What kind of photo is on the front and what’s on the back?
JB: I think the action photographs are pretty nice. If it’s a good picture I think that’s probably the one I would go with. What I would want on the back are probably the stats. I remember as a kid I was always looking at the stats of the person on the front, so I would definitely put stats on the back.

TKL: We cater to a passionate audience of folks who collect sports cards as their hobby. So, what are your hobbies off the ice?
JB: In the summer I like boating, playing golf and tennis. I’m pretty active but I try to stay out of the dangerous sports.

TKL: When was the last time you laughed so hard that you cried?
JB: Probably yesterday, I would have to say, with [Kings teammate] Matt Greene. He’s a pretty funny guy.