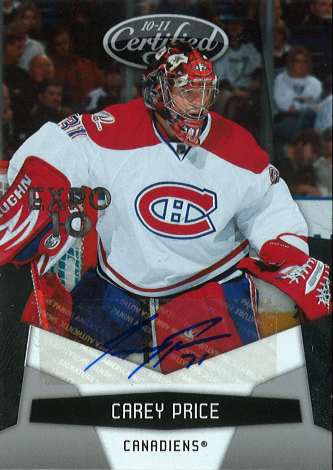 Panini America will be doing its best Felix Potvin impersonation next month . . . by pulling out all the stops in Toronto.

Panini America will be doing its best Felix Potvin impersonation next month . . . by pulling out all the stops in Toronto.

Indeed, during the 2010 Toronto Sportcard and Memorabilia Expo (beginning Nov. 12 at the Toronto International Centre), the company aims to dazzle a decided hockey contingent with another of its trademark, show-stopping wrapper redemption programs.

But football and basketball collectors will most certainly find something irresistible in those two-card redemption packs as well.

Randomly inserted into packs will be limited-edition autographed versions of the base set (Ryan Miller, Jonas Gustavsson), both Rated Rookies (Taylor Hall and Tyler Seguin) and Ice Kings (Ray Bourque).

Collectors will receive a two-card Expo-exclusive pack for every five 2010-11 hobby packs from Panini America’s multisport roster of products – or a full box of 2010-11 Score Hockey – they open at the company’s booth.

Stay tuned to The Knight’s Lance next week to find out about the company’s plans for instant-win prizes and Box Wars contests at the Expo.