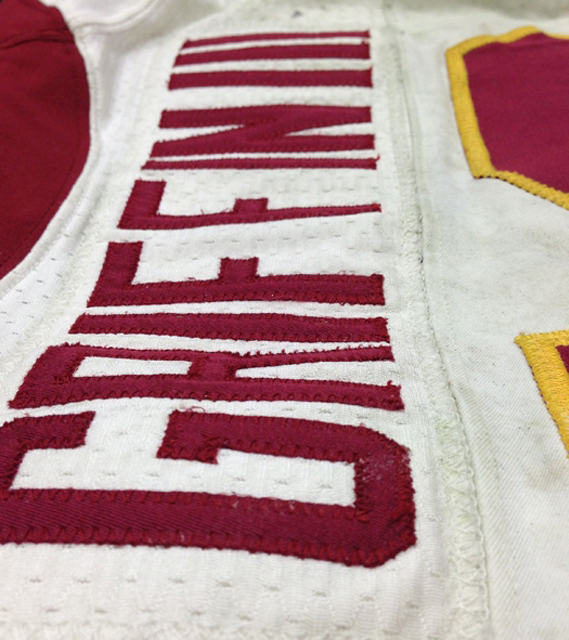 To be blunt, these are some of the greatest, grungiest, fantastically filthy jerseys we've seen all season. In fact, the following gallery is so dirty many businesses might consider it NSFW. Not us, though. At Panini America, we simply consider it spectacular.

Later tonight, during the “NFL Honors” primetime special on CBS (8 p.m. CST), one of five outstanding first-year players — Robert Griffin III, Panini Authentic exclusive Andrew Luck, Doug Martin, Alfred Morris or Russell Wilson — will take home the prestigious 2012 Pepsi Max NFL Rookie of the Year Award. All five candidates delivered sensational rookie campaigns this season, but for the purposes of this post, we’ll focus on the exploits of the two Washington Redskins on the list: RG III and Morris.

Why those two? That’s a fair question with a profound, pungent answer. Just last week, Panini America officials acquired sweat-soaked, battle-torn pieces of history from both men — jerseys worn against the Pittsburgh Steelers (Griffin) and Cleveland Browns (Morris) while each was making his case for the ROY hardware.

To be blunt, these are some of the greatest, grungiest, fantastically filthy jerseys we’ve seen all season. In fact, the following gallery is so dirty many folks might consider it NSFW. Not us, though. At Panini America, we simply consider it spectacular.

For the record, Griffin completed 16 passes for 177 yards and one touchdown wearing this jersey during a 27-12 loss to the Steelers in Week 8. Morris, meanwhile, absolutely cleaned up wearing his, rushing for 87 yards and two touchdowns in the Skins’ 38-21 victory over Cleveland in Week 15. Now, the jerseys will make their way through the Panini America product development process and will ultimately become part of trading card history some time during the 2013 season.

But before they do, here’s an up-close examination of their greatness . . .