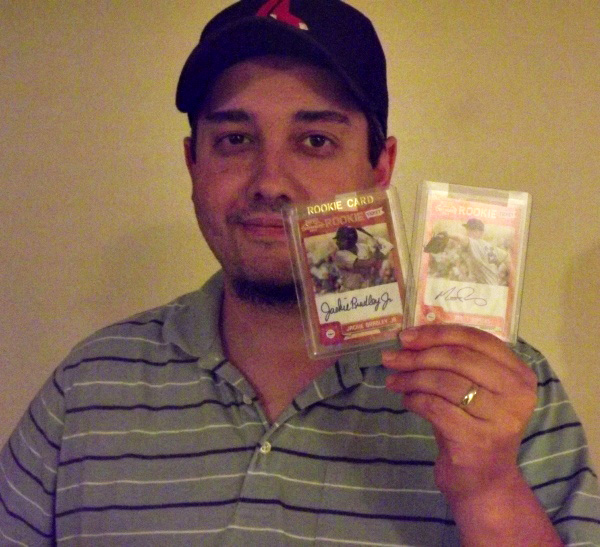 The second we saw Rick Hutnak's Tweet trumpeting his rather impressive collection of 2011 Contenders Baseball autographs, we knew we had to dig deeper into the collecting habits of the Massachusetts native now living in Clearwater, Fla.

The second we saw Rick Hutnak’s Tweet trumpeting his rather impressive collection of 2011 Contenders Baseball autographs, we knew we had to dig deeper into the collecting habits of the Massachusetts native now living in Clearwater, Fla.

So we reached out to him — via Twitter, of course — to see if he’d be interested in sharing the story behind it. You know: How he got started, how long it took and what interesting anecdotes he experienced along the way. What follows is Hutnak’s entertaining account in his own words.

“First off, I’ve been a fan of Panini since I was a kid collecting sticker albums every year. So it was an easy choice for me to continue to collect Panini America in my adult life. I’ve always been a prospect collector more than a collector of the big star cards. The one simple reason? They’re fun and affordable. It’s great to watch the players you pulled progress in their career into stardom or into relative obscurity. And as a lifelong Red Sox fan, born and raised in the Worcester, Mass., I have always tried to hunt down any Sox prospects that I could find. That’s where the journey for this set began.

“My favorite local card shop here in Florida had just gotten their new shipment of wax in and a part of it was the new 2011 Playoff Contenders Baseball. It looked nice enough and I really liked the way they were designed. So I cracked a pack.  The meat of the pack was my first Rookie Ticket Auto of Archie Bradley! Immediately I thought, ‘Box time.’ I ripped through the box and pulled another two Rookie Ticket Autos, Levi Michael and Kolten Wong. I was pretty happy, but I didn’t really think too much about them after that — at least for another week or so.

“Then, on my next visit to Mike’s Sports Connection, my favorite hot spot, I took a look at what new cards he had on display that day. Dylan Bundy? Really? Immediately I asked Mike what he wanted for it. For me  . . . $30 would be fine. Score! He gave me a great deal so I had to pick up some more. Another box, two more Rookie Ticket Autos.

“The next day, I stopped by Mike’s to see what was new. We decided to crack open another couple of packs while we were talking about the box I had bought the day before. That’s when I mentioned to him the possibility of attempting to complete the Rookie Ticket Auto set. We both came to the realization that while it would be a great accomplishment, it could never be done — not on my sandwich-maker salary. Back to those packs. I pulled nothing, Mike pulled the Gerrit Cole Rookie Ticket Autograph! Mike tells me for $10 it’s mine. Really? Done deal. Now its on!

“I take it ‘to the streets.’ I post all over Facebook that I’m going to do this set. Most people wished me luck and, after a while, I made a few key trades here and there and started putting a pretty good dent in the set. Inevitably, I did what I had to do — eBay. I snagged a bunch there and now I was down to needing just five cards: My two Red Sox (Matt Barnes and Jackie Bradley Jr.), Danny Hultzen, Javier Baez and Francisco Lindor.

“A Facebook friend recommended an online card forum and there I found Baez and Lindor. At this point, I had to go for it. No haggling, I just bought them on the spot. Three to go. After another area search I found a collector on Craigslist who had Bradley. Yup, I’ll take it! Two left. Everyone I talked to could easily predict that I still needed Hultzen. Barnes was just impossible to find for some reason.

“A few weeks later — some how, some way — my $90 offer on a Hultzen was accepted! Now I needed just one more card. And I knew where to find it. After pleading with my Facebook friend, Elliot, for the Barnes, it was a no-go. For Elliot is a diehard Orioles fan. It was his not-so-secret hope that I would never complete the set and that I would, in turn, give up and trade him the Dylan Bundy. It was all in good fun. But, no, he still planned on keeping that Barnes and told me I had to whatever it took to find one elsewhere.

“The storybook ending, of course, would be that I went back to Mike’s shop and bought that miracle pack that included Barnes. The truth, however, was that I found one on eBay a few days later. My set was complete. That feeling of accomplishment? I got it. The satisfaction of knowing that if a big star emerges from the 2011 class that I’ve got his on-card autograph? I’ve got that, too.

“The next step? Save up and get them all graded, I guess? Make a giant shrine to Panini America? Not sure. I just know that I love them and there’s no way they’re ever leaving my collection. The thrill of the hunt was the most fun. And ending with a Boston guy was priceless. All I know is that next year’s set will be just as fun.

“Thanks to the guys at Panini America! You’ve made collecting fun again.”

Thanks for sharing your story, Rick. Great stuff. Congratulations on your accomplishment.