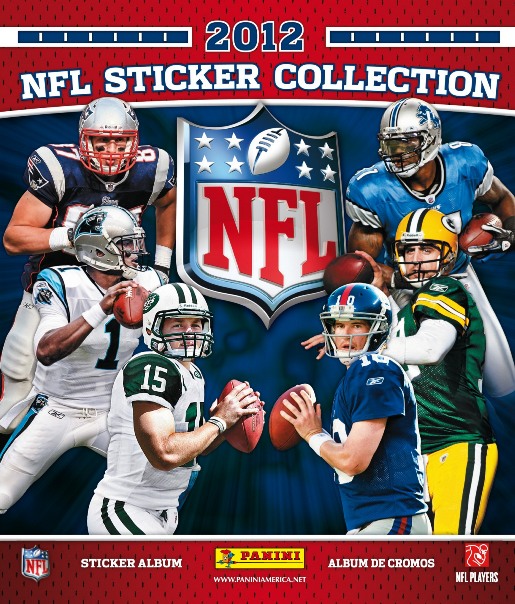 Panini America, the leading global publisher of sports and entertainment collectibles and the official trading card and sticker manufacturer of the Pro Football Hall of Fame, has announced its cover athletes for the Official 2012 Panini NFL Sticker & Album collection.

Panini America, the leading global publisher of sports and entertainment collectibles and the official trading card and sticker manufacturer of the Pro Football Hall of Fame, has announced its cover athletes for the Official 2012 Panini NFL Sticker & Album collection.

“Our Official NFL Sticker & Album Collection continues to grow in popularity every year and over its first two seasons has been enjoyed by millions of fans and collectors,” said Panini America CEO Mark Warsop. “It’s a unique fan experience that is fun and affordable for the entire family while also appealing to the most hardcore fans. We’re truly excited about the launch of the 2012 edition.”

The 72-page full-color album includes 494 stickers (354 glossy, 100 special holographic stickers and 40 micro-etched stickers) and features two-page spreads for each of the 32 NFL teams.  It also includes special sections for the top 2012 rookies including No. 1 overall pick, Indianapolis Colts quarterback Andrew Luck, and Washington Redskins quarterback Robert Griffin III, a recap of the 2011 NFL Playoffs and Super Bowl XLVI, and a one-page tribute to the 2012 Pro Football Hall of Fame inductees.

For the second consecutive year, Panini America, the exclusive trading card partner of Pop Warner, has partnered with the youth football organization for an in-album concussion awareness program that will award new football helmets to Pop Warner teams that collect 2012 NFL Sticker packet wrappers throughout the season.

“As millions of kids suit up for the upcoming football season, the NFL Sticker Collection serves as a unique platform to help parents, participants and coaches understand the symptoms to identify concussions,” said Jason Howarth, Panini America Vice President of Marketing. “As kids collect their favorite NFL players and look to complete their 2012 NFL Sticker Collection, we look forward to awarding new helmets to Pop Warner programs around the country.”