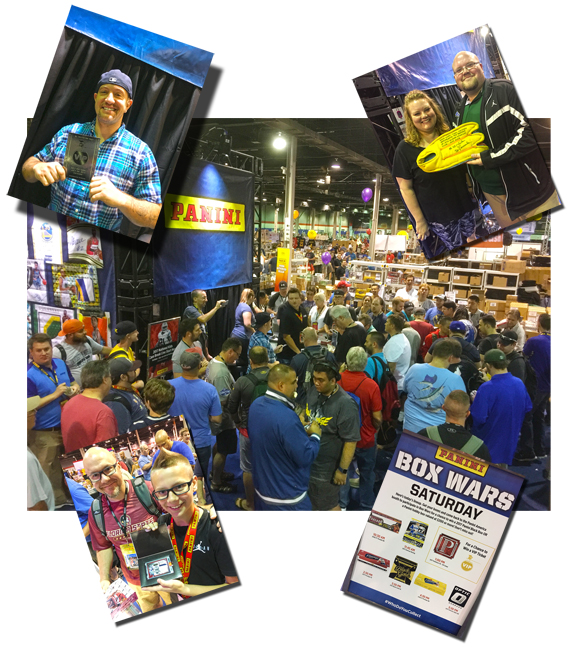 ROSEMONT, Ill. – It was hard to miss the constant energy flowing at the Panini America booth throughout the 2017 National Sports Collectors Convention -- and hundreds of collectors helped spike the buzz daily during the Box Wars contests that yielded some truly unique prizes.

ROSEMONT, Ill. – It was hard to miss the constant energy flowing at the Panini America booth throughout the 2017 National Sports Collectors Convention — and hundreds of collectors helped spike the buzz daily during the Box Wars contests that yielded some truly unique prizes.

The Box Wars crescendo came Saturday afternoon when Matt Shelton of Lansing, Mich., walked away with the biggest catch of the weekend — a coveted ticket to the exclusive Panini National VIP party. Shelton beat out 51 other hungry collectors who ripped into 2017 Pantheon Football looking for a specifically numbered base card.

“I’m pumped,” Shelton said after letting out a “woo” while hearing about all the amazing party perks.

Shelton’s disbelieving smile told the whole story as Panini America’s Kevin Haake presented Shelton with the ticket that put him at Chicago’s Revel Fulton Market Saturday night for the hobby’s party of the summer. Shelton — who has attended several Nationals but never a Panini VIP party — enjoyed an evening mingling with, and scoring autographs from, NFL Hall of Famers Deion Sanders and LaDainian Tomlinson, NBA rookie Lonzo Ball and so many many others. Shelton also picked up his share of the always-amazing silver and gold National packs.

“It was a last-minute thing,” Shelton said of jumping into the Box War that paid huge dividends.

On Sunday, Panini America brought fine, feathered friend The Famous San Diego Chicken to the booth for a special appearance that resulted in perhaps the most unique Box Wars prize of the weekend: A game-worn Chicken foot from the unrivaled mascot’s last appearance at a Padres game in the old Jack Murphy Stadium.

While that fabled foot and VIP Party ticket ranked as perhaps the most prestigious Box Wars prizes, the other 26 Panini America Box Wars contests held throughout National week brought plenty of smiles to collectors young and old who snagged amazing rewards for simply opening a box of Panini America cards.

On Friday, the right box of 2017 Revolution Soccer netted one young man a box of 2016 National Treasures Football with a Drew Brees Printing Plate 1/1 autograph, an Andrew Luck autograph and a Paxton Lynch Rookie Patch Autograph. Not too shabby.

On a wildly successful week full of Panini America activations, the company’s annual Box Wars contests certainly played a pivotal role. Below is a gallery of some of the week’s Box Wars highlights.