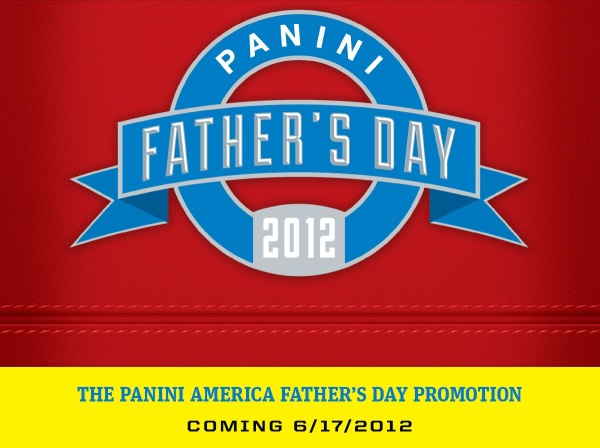 Last November, Panini America officials brought -- for the first time ever -- the frenzy, excitement, energy and unbridled spending power of Black Friday to hobby shops across the country with a special in-store wrapper redemption program that included a promotion-exclusive card set and unparalleled buzz.

Last November, Panini America officials brought — for the first time ever — the frenzy, excitement, energy and unbridled spending power of Black Friday to hobby shops across the country with a special in-store wrapper-redemption program that included a promotion-exclusive card set and unparalleled buzz.
Next month, they will do it again with a similar program developed around Father’s Day.

With its Father’s Day promotion, Panini America will look to mimic a massively successful Black Friday initiative that The Magazine Exchange Owner Roger Barry called the industry’s “best single innovation or advancement” of the year and one that generated more than $1.5 million of incremental business according to Industry Summit Organizer Kevin Isaacson.
“[Panini America’s Black Friday promotion] brought people into hobby shops, it allowed us to engage with the shops, it promoted additional sales, and it delivered for the shops that participated,” Barry said. “We had tons of positive feedback; several stores reported their best sales day ever. It increased our sales on all Panini America products – not just those featured in the promotion.
“Could Panini improve on some elements of the promotion for future years? Of course. But it was a great promotion, and we believe the store traffic it created is something we should strive to repeat and increase in the future. The nature of our business demands that we create exciting in-store events, and this was a good example of what we can accomplish by working together and driving customers into stores for a great collecting experience.”
The key to the Father’s Day promotion’s success — just as it was for Black Friday’s — will be a promotion-exclusive, multisport set that includes unique autograph and memorabilia content that collectors simply can’t get anywhere else. Father’s Day packs will be distributed to local dealers based on their purchase of pre-selected products; dealers, in turn, will distribute those packs to their customers via a wrapper-redemption program.
“The Black Friday promotion was a phenomenal success for us and far exceeded our expectations,” said Jason Howarth, Panini America Vice President of Marketing. “We took the lead on this massive initiative in part because we wanted to bring the intense excitement of our wrapper-redemption programs at the National Sports Collectors Convention to local hobby shops across the country.
“But perhaps more importantly, we wanted to help hobby shops continue to be bona fide destination points for collectors. Father’s Day is the perfect time to introduce a new nationwide hobby initiative and it’s something we hope will become an annual event in the hobby. It’s fair to say we all remember the first time we got a pack of cards from our own fathers and gave that first pack to our own children. That shared excitement and experience of opening packs of Panini America cards between father and child is something we want to celebrate.”
Stay tuned to The Knight’s Lance for additional details on the Panini America Father’s Day promotion. Until then, enjoy this small sneak peek into some of the exclusive cards planned for the program.