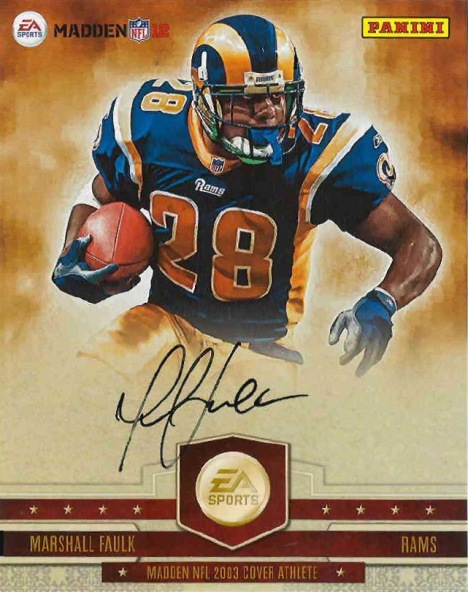 Panini America: It's in the game. EA Sports' universally recongized catch phrase will take on a most collectible meaning later this summer when autographed Panini America Marshall Faulk cards are inserted into special Hall of Fame Editions of the videogame juggernaut that is Madden 12.

Panini America: It’s in the game.

EA SPORTS’ universally recognized catch phrase will take on a most collectible meaning later this summer when autographed Panini America Marshall Faulk cards are inserted into special Hall of Fame Editions of the videogame juggernaut that is Madden NFL 12.

Faulk, the first Madden NFL cover subject to be elected to the Pro Football Hall of Fame, will spend the next few months signing — on-card — four different versions of special Panini America cards that will be randomly inserted into every Madden NFL 12 Hall of Fame Edition game.

While this marks the first time that autographed trading cards have been inserted into videogame units, there’s no denying that the marketing initiative is filled with cross-promotional pop.

“Madden fans are football fans, first and foremost,” says Anthony Stevenson, the Director of Marketing for EA SPORTS. “So, the crossover appeal between our community and football collectibles is incredibly high. Madden fans and card collectors share many similar traits. They are both highly passionate about their favorite players, teams and NFL football as a whole. They are both highly competitive. Whether it be seeking out that rare card or taking down their rival in Madden — they’ll do whatever it takes.”

The special autographed Faulk cards are but one part of a multi-pronged marketing attack sure to place Panini America prominently in the minds of those Madden Nation members playing the game’s Hall of Fame Edition later this summer.

“We’re really excited to partner with Panini on the Madden NFL 12 Hall of Fame Edition,” Stevenson says. “They are the best at what they do, and they bring a new level of authenticity to our Franchise. Madden Ultimate Team is, at its core, a card collecting mode, so to have Panini involved in some of the design of our new cards adds even more credibility to the experience. Both our brands work tirelessly to embrace the passion of the NFL football fan, so it’s a great fit.”

You can sneak a peek at the special Faulk autographed cards — as well as many of the Madden Ultimate Team Platinum Pack cards — below. For more information on everything else that’s in store for Madden NFL 12, you can go here.