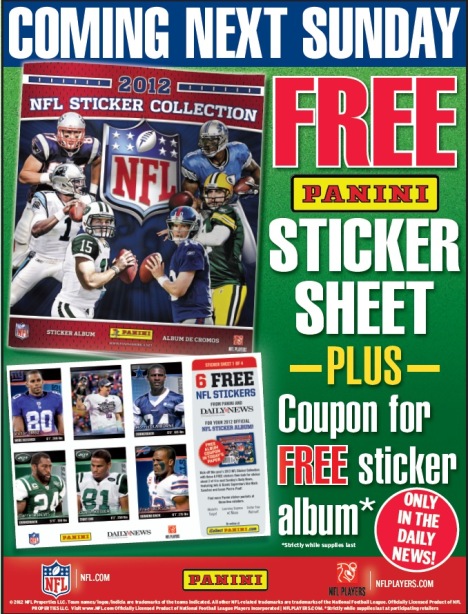 Panini America's 2012 NFL Sticker & Album Collection is about to embark on a massive month-long promotion with the New York Daily News that will guarantee the fun product adheres to a prominent place in the minds of millions of New Yorkers.

To coincide with the start of the NFL season, Panini America’s 2012 NFL Sticker & Album Collection is set to embark on a massive month-long promotion with the New York Daily News that will guarantee the fun product adheres to a prominent place in the minds of millions of New Yorkers.

In fact, this past Sunday, more than 600,000 New York Daily News readers were treated to a full-color teaser of the promotion that kicks off in earnest this weekend. Beginning Sunday and continuing for four weeks, Panini America and the New York Daily Newswill insert 600,000 special NFL sticker sheets into Sunday’s editions. The special sheets will feature players from the defending Super Bowl champion New York Giants, the New York Jets, NFL stars from opposing teams and top 2012 rookies.

“Our NFL Sticker & Album Collection has taken huge strides in momentum during each of its first two years, and this New York Daily News partnership represents a massive opportunity for us to continue that growth,” said Jason Howarth, Panini America’s Vice President of Marketing. “It doesn’t get much bigger than releasing this year’s collection to the media capital of the world during the NFL’s Kickoff Weekend. That’s huge.”

Panini America also provided 50,000 free 2012 NFL Sticker albums that will be available at Modell’s and 7-Eleven stores. For a limited time, NFL fans can get a free coupon in the Sunday New York Daily News to redeem for the free album.

You can check out the action-packed 30-second spot — as well as the New York Daily News print ad that appeared last Sunday and the four special sticker sheets — below.