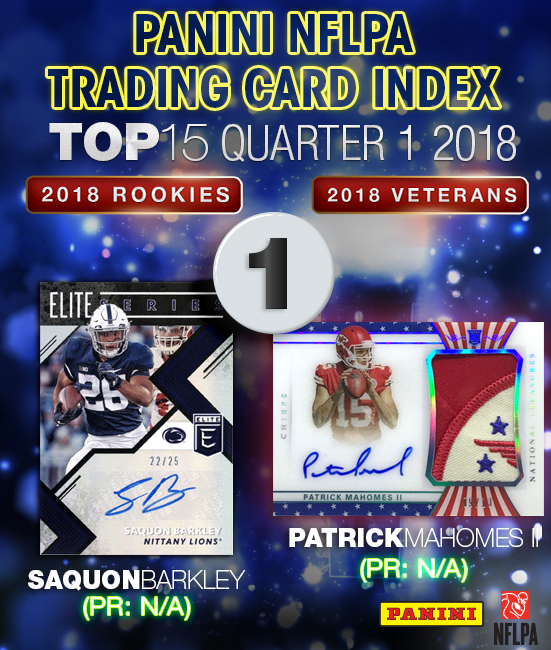 The rookies have arrived! During the recently completed 2018 NFL Draft, the NFL welcomed its next class of performers. Seemingly every prospect in this class had spent the last several months being assessed and evaluated in every way possible – by football card collectors.

The rookies have arrived! During the recently completed 2018 NFL Draft, the NFL welcomed its next class of performers. Seemingly every prospect in this class had spent the last several months being assessed and evaluated in every way possible – by football card collectors.

“It’s an honor to make the NFLPA Panini Trading Card Index, especially as the only defensive player,” said Bradley Chubb. “After touring Panini HQ with VP of Marketing Jason Howarth and understanding the metrics and what types of players and positions are considered most collectible, it’s exciting to see that we can break some trends and find myself in great company with all the skill position guys on the list.”

The arrival of the 2018 rookie class has forced a major shakeup on the veteran list this quarter as last season’s top rookies (including Patrick Mahomes II, Deshaun Watson, Alvin Kamara, Mitchell Trubisky, Christian McCaffrey and more) transition to the veteran list. That migration has bumped former No. 1 mainstay Tom Brady to No. 3 behind Mahomes and Watson.

Panini America – the exclusive trading card manufacturer of the NFL and NFL Players Association (NFLPA) – and NFL Players Inc., the licensing and marketing arm of the NFLPA, created the Panini NFLPA Trading Card Index in 2016 as a way to rank the top-performing football players (15 rookies, 15 veterans) in the licensed trading card industry. Once a quarter, the NFLPA Panini Trading Card Index ranks players based on several key factors, including secondary-market transactions, overall trading volume and collectibility based on on-field performance and expectations (e.g., rookie hype and collector speculation).

ABOUT PANINI:
The Panini Group, established more than 50 years ago in Modena, Italy, has subsidiaries throughout Europe, Latin America and the United States.  Panini is the world leader in officially licensed collectibles and is the most significant publisher of collectibles in the U.S., with exclusive licenses for the NFL, NFLPA, NBA, FIFA, College and licenses with the MLBPA, NHL,NHLPA and Disney, and other key properties from many other licensors. Panini is also the exclusive trading card and sticker partner of the Pro Football Hall of Fame and Pop Warner Little Scholars, Inc. Panini has distribution channels in more than 100 countries and employs a staff of over 800. For more information visit us at www.paniniamerica.net, www.paninigroup.com or https://blog.paniniamerica.net/. You can also follow Panini America on social media platforms Facebook, Twitter, YouTube and Instagram.

ABOUT NFL PLAYERS ASSOCIATION
The National Football League Players Association is the union for professional football players in the National Football League. Established in 1956, the NFLPA has a long history of assuring proper recognition and representation of players’ interests. The NFLPA has shown that it will do whatever is necessary to assure that the rights of players are protected—including ceasing to be a union, if necessary, as it did in 1989. In 1993, the NFLPA again was officially recognized as the union representing the players, and negotiated a landmark Collective Bargaining Agreement with the NFL. The current CBA will govern the sport through 2020.