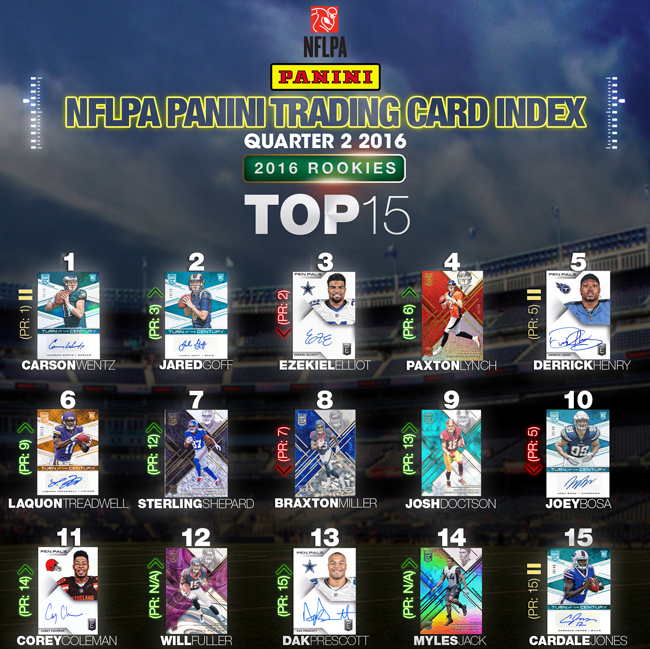 Once a quarter, the NFLPA Panini Trading Card Index ranks the top 15 rookies and top 15 veterans based on several key factors, including secondary-market transactions, overall trading volume and collectability based on on-field performance and expectations (e.g., rookie hype and collector speculation). The second NFLPA Panini Trading Card Index, listed in its entirety below, includes updated rankings for both rookies and veterans based on post-draft reaction and early buzz based on rookie mini camps and OTAs in advance of training camps. The newest Index rankings are based on secondary-market transactions and trading volume that took place during the second quarter of 2016.

“Growing up, you always dream of seeing your face on a trading card. To have that become a reality now, is truly an honor – even more considering some of the names that are on this list from the rookie class,” Elliott said. “It’s really cool to see how much fans value your cards, and it’s humbling to be a part of the legacy that Panini has built.”

“As I begin my third season, it’s kind of surreal to see my name listed alongside some of the best players in the game today,” Carr said. “When you come into the league, you hope fans recognize the hard work you’re putting in. Being a part of the Panini index of veterans is a great moment – that fans would think highly enough about me, and my game to put me amongst some of the top players.”

“So much has happened in the few months since the debut edition of the NFLPA Panini Trading Card Index and that has led to some surprising shifts in the rankings,” said Jason Howarth, Panini America’s Vice President of Marketing. “The top rookies are now with their NFL teams and collector expectations have led to feverish activity on the secondary market. On the veteran side, you’re seeing collector sentiment shift from what happened in 2015 to what’s being expected in 2016.”

Notable second-quarter sales driving rookie rankings include a 2016 Donruss Elite Football Pen Pals card featuring autographs from Wentz, Goff and Lynch that sold for $345. Meanwhile, a 1/1 Gold version of Wentz’s Rookie Card from 2016 Donruss Elite Football is currently being offered on eBay for $1,500. On the veteran side, a one-of-a-kind Tom Brady autograph patch card from 2015 Flawless Football sold for $10,000 while three of Luck’s 2012 Playoff Contenders Football autographed Rookie Cards sold for more than $2,000.

Click the graphics below to see enlarged versions of this quarter’s rankings.