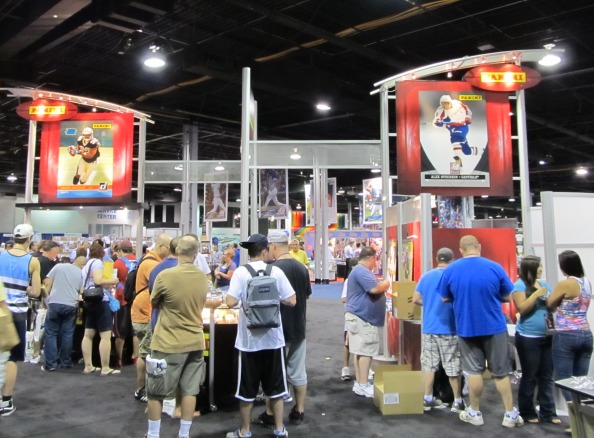 Mere seconds after the Donald E. Stephens Convention Center doors opened Wednesday afternoon, dozens of Panini fanatics had descended upon the company’s huge display in the heart of the corporate pavilion. Can you guess what they were after?

None other than the first crack at the company’s coveted wrapper-redemption packs earned by opening many of Panini America’s 2010-11 line of products. Many collectors took full advantage of the promotion Wednesday by breaking multiple cases of 2010-11 Totally Certified Basketball and 2010-11 Luxury Suite Hockey and exchanging the empty wrappers for the silver packs with the silver lining.

We’ll have more on the excitement of Panini America’s 2011 redemption program tomorrow.

The Panini America display is hard to miss, with a giant Tom Brady VIP card blow-up easily spotted from most of the convention hall floor. There’s also plenty of Chicago touches inside the booth, with posters of the Blackhawks’ Jonathan Toews, the Bears’ Jay Cutler and Bulls young superstar Derrick Rose prominently displayed.

And, just to show the company is on top of current events, there was even a sweet patch card of newly re-signed Blackhawks sniper Patrick Sharp in one display cases. Oh, and be sure to check out the captivating displays devoted to the company’s Panini HRX Video Trading Cards and the golden goodness of 2010-11 Gold Standard Basketball. These cutting-edge cards must be seen to be believed.

Stay tuned to The Knight’s Lance all week long for more exclusive coverage from the NSCC show floor. For now, enjoy this massive gallery of highlights from a productive first day, including a special guest appearance by Forever The Sickest Kids lead singer — and noted collector — Jonathan Cook.

40 Replies to “Panini America On Location: A Frenzied First Day at the 2011 National Convention”