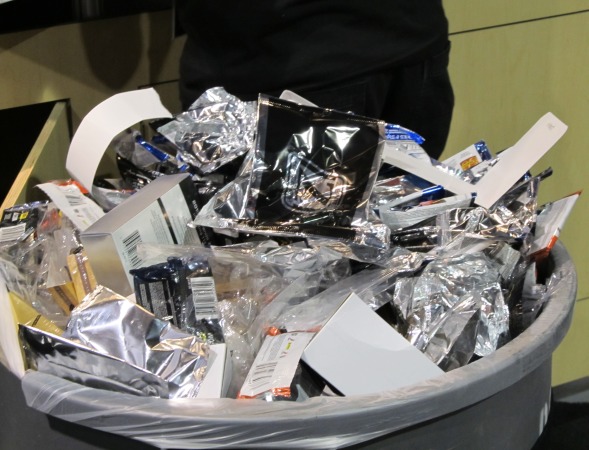 ROSEMONT, Ill. -- If, by chance, you've inexplicably been unable to find the Panini America booth at the 32nd Annual National Sports Collectors Convention, just follow the trail of foil wrappers.

ROSEMONT, Ill. — If, by chance, you’ve inexplicably been unable to find the Panini America booth at the 32nd Annual National Sports Collectors Convention, just follow the trail of foil wrappers.

Those shiny remnants will lead you to redemption heaven, where Panini America lovers have spent the first two days of the show busted case upon countless case of their favorite basketball, football and hockey products to pick up the much coveted redemption packs.

Some do it in small doses — a box of Zenith Hockey here, a box of Prestige Football there. Others go all out — breaking multiple cases of everything from Totally Certified Basketball and Donruss Elite Football to the big boys, Gold Standard Basketball and National Treasures Football and Basketball.

All you need to know about the Panini America redemption process can be seen in the overflowing garbage cans and smiling collectors.

“We loaded them up this year,” Panini America’s Scott Prusha offered as a reason why collectors have pounced on the redemption offerings. Fast fingers are needed to break huge cases, but no hands were too tired to start busting redemption packs.

Early redemption hits on Thursday — the first full day of the show — included a 1-of-1 Mark Ingram Sketch Card, a Cam Newton autographed patch card and a 1-of-2 Tim Tebow autograph that had Panini’s own Tracy Hackler briefly distracted from the frenzy surrounding him. One collector from Washington proudly showed off his big hits, which included a 14K John Stockton card from Gold Standard and a much sought-after redemption hit.

Exactly how crazy were things? Prusha could barely put into words his reaction to the response collectors have already shown to this year’s redemption program.

“The line has been overwhelming, we’ve already filled up like 10 trash cans,” said Prusha, offering this simple parting advice for National show-goers planning on attending the Panini America booth the rest of the week:  “Get here early.”