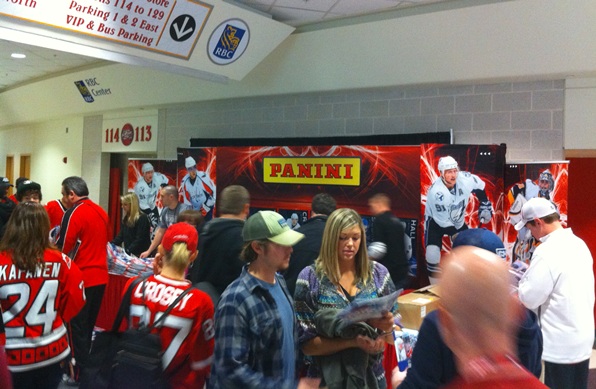 We just thought Friday was wild and woolly during the first day of 2011 NHL All-Star Weekend. Turns out it was nothing more than an ice-breaking appetizer.

RALEIGH, N.C. — We just thought Friday was wild and woolly during the first day of 2011 NHL All-Star Weekend. Turns out it was nothing more than an ice-breaking  appetizer.

Indeed the weekend gave way to a frenzied, festive free-for-fall that featured show-stealing Panini America activation at both the Raleigh Convention Center for NHL Fan Fair and at the RBC Center for a massive sampling opportunity during the Honda NHL SuperSkills competition.

By mid-afternoon, members of the Panini America team were high-tailing it over to the RBC Center to set up on the lower concourse to distribute more than 6,000 free Official NHL Sticker Albums and commemorative sticker sheets. The overwhelming appeal of the adhesive collectibles was delightfully obvious. The first free album was distributed at around 5:30 p.m. EST.  The last one left the table after 10:15 p.m.

While thousands of collectibles-crazed hockey fans were introduced to the sticker collection for the first time, it’s worth noting that packs of 2010-11 Donruss and Score Hockey were moving briskly inside the RBC Center’s Hurricanes team shops.

The fun continued Sunday, with more wrapper-redemption madness at the Raleigh Convention Center. During Sunday’s evening’s NHL All-Star Game, Panini America will once again be located on the concourse just outside section 113, this time to distribute more free NHL Sticker Albums and Stickers as well as show-specific Guardian Adrenalyn cards of the Carolina Hurricanes’ mascot.

Enjoy this gallery of images chronicling a simply insane Saturday. And stay tuned to The Knight’s Lance for additional coverage of 2011 NHL All-Star Weekend.