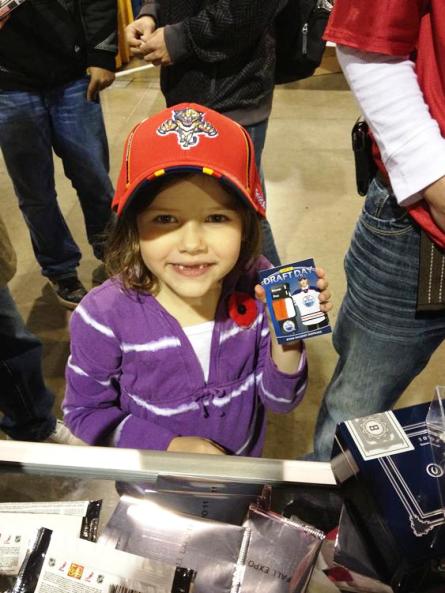 TORONTO, Ontario — Day two at the 2011 Toronto Fall Expo is in full swing and once again, Canada’s most rabid collectors are making elbow room inside the Panini America booth incredibly hard to come by.

The more than 1,200 boxes of Panini America product busted by collectors participating in the company’s wildly popular wrapper-redemption program on Friday are sure to be dwarfed by day’s end Saturday. As you’ll see in the gallery below, filed by Panini America’s own Chris Reed straight from the show floor, collectors young and old are uncovering cherry cards galore from those vaunted silver-foil wrapper-redemption packs.

Something else you’ll notice is that the 2011 Toronto Fall Expo has a little something for everyone, from hockey to football to professional wrestling to MMA. Oh, you’ll also notice Toronto Maple Leafs legend Doug Gilmour, a headlining autograph guest at the show, holding a special Panini America blow-up card that’s almost as big as he is. Luckily for us, he also signed the museum-quality piece.

Stay tuned to The Knight’s Lance throughout the weekend for continued coverage of the show. And if you want to be eligible to win some sweet prizes from the show, including autographs and some of those silver-foil stunners, simply comment on your favorite images from our various galleries from the show.

22 Replies to “Panini America On Location: Scenes from a Wild Day Two at the 2011 Toronto Fall Expo”