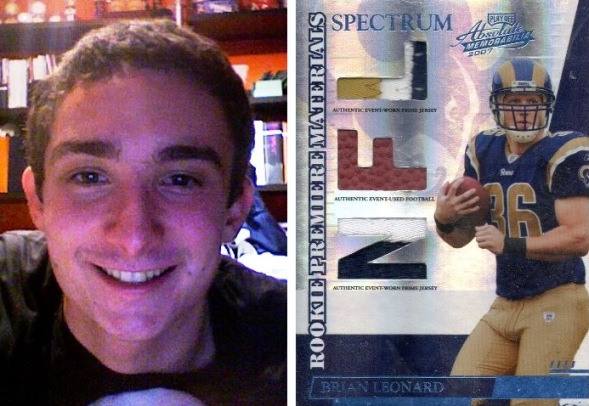 DROPPING TOMORROW (2/2)
2022 Hoops #NBA Premium Box Sets go live tomorrow at 11am (CST) via Dutch Auction! There are only 199 sets printed and each base card is numbered to /199! Also find a numbered Hoops Tribute auto in each set!
SHOP: https://qr.paniniamerica.net/2kaz9

You are truly a legend #12, in every sense of the word. Thank you for all of the memories. @TomBrady
#GOAT #TB12 #ThankYouTom #whodoyoucollect

Truly grateful on this day. Thank you 🙏🏻❤️

For the 6,974th example of why collecting sports cards -- especially Panini America ones -- is so darn worthwhile, look no farther than the personal collection of New York resident Joshua Waldman.

For the 6,974th example of why collecting sports cards — especially Panini America ones — is so darn worthwhile, look no farther than the personal collection of New York resident Joshua Waldman.

In a hobby often overflowing with collectors who — rightfully so — covet cards honoring only the biggest superstars in the sports universe, Waldman instead focuses his efforts on Brian Leonard, the often overlooked running back from Rutgers who’s fashioned something of an underground following in a four-year career so far split between the St. Louis Rams and Cincinnati Bengals.

But instead of us telling his story, we figured we’d let Joshua himself do that.

“Living in the Metropolitan New York, football is all around me. From high school football all the way up to the Jets and Giants in the NFL, football is always present in my area. However, there was always an absence of that hometown college football team for me to root for. In 2006, all that changed.

“As Rutgers’ 2006 season progressed, and the team continued to win and move up in the rankings, I started to become more and more of a fan. And then, there was ‘Pandemonium in Piscataway.’ Beating a second-ranked Louisville team in primetime on a Thursday night cemented my status as a Rutgers fan. I followed the entire team, and the individual players’ journeys throughout college and to the pros, but one player really stuck out to me. Although every RU football fan knows who he is, many casual NCAA football fans probably have never heard of him. This player is Brian Leonard.

“The reason I collect him is not only because of the incredible statistics that he put up while at Rutgers, but also because of his attitude as a football player. Prior to the 2006 season, Leonard had been the feature back, getting all of the carries and all of the glory that come with it. Then, Ray Rice came along. Leonard, willing to do whatever it took to help the team, moved to fullback despite his obvious talent at the running back position. This unselfishness and dedication to his team made me a Leonard fan for life.

“Drafted in the second round, Leonard has had a fairly innocuous NFL career, but I continue to collect him because of his attitude and love for the game. He never showboats, he works hard and he never quits, and that, as a fan, is the best thing a player can have. As a result, I began to collect his cards after he was drafted in 2007.

“The collection started off slowly, but has skyrocketed from there. Being a teenager, my budget for the collection has been extremely limited, so I have missed out on some of the bigger items, but I believe that I have built an extremely incredible collection of my favorite player.

“There’s a ton to like about Panini America products. National Treasures has always been one of my favorite sets because of the elegant design. Also, there are a variety of parallels in the set, but not so many that it gets overwhelming. In addition, all of the different sets that Panini America produces, from Gridiron Gear to Rookies & Stars and across the product run, there is a great deal of variety and quality throughout.

“Unlike other companies, every year, Panini seems to come up with a new and exciting design to get collectors’ interest piqued. From the Rookies & Stars Team logo patch autos to the Gridiron and NFL Team signatures in Gridiron Gear, every product has its own unique and fun aspect about it, which is why I enjoy Panini America so much.”

For a look at some of those Brian Leonard cards Waldman enjoys the most, check out the gallery below. (Oh, and if you want to have your collection featured on The Knight’s Lance, send us an email at [email protected].)