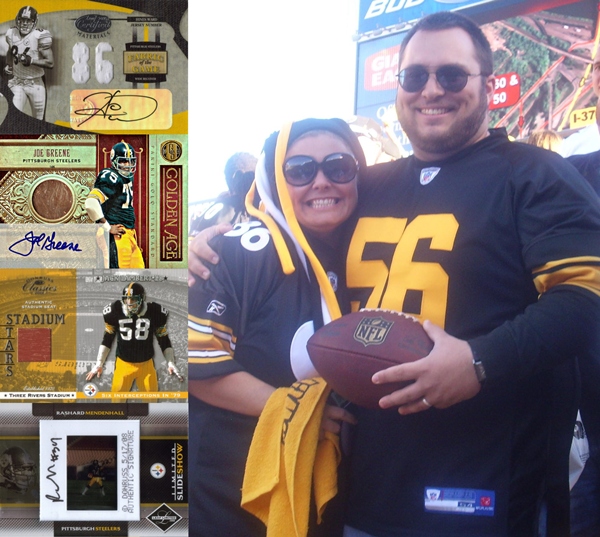 When it came to profiling the collecting exploits New Mexico's Johnny Angelis, we first had to narrow our focus. Clearly, his passion is quite profound. We could've focused on his completed 2010 Classics Flashback Fabrics patch set . . . or his full sets of 2001 Classics Hashmarks and Stadium Stars sets.

When it came to profiling the collecting exploits New Mexico’s Johnny Angelis, we first had to narrow our focus. Clearly, his passion is quite profound. We could’ve focused on his completed 2010 Classics Flashback Fabrics patch set . . . or his full sets of 2001 Classics Hashmarks and Stadium Stars sets.
Ultimately, though, we settled on Angelis’ superstar-laden, generations-spanning tribute to the Pittsburgh Steelers, the team he’s rooted for — and collected — for decades. This is his story in his own words. Enjoy.

“I’ve always loved the chase of putting sets together. It gives you a sense of accomplishment when you’ve completed them, but I think I am most proud of my Steelers collection. I started collecting cards again when my son was born because I wanted something we could both enjoy. It’s so fun to see my 7-year-old son get more excited about pulling Steelers base cards from packs than about pulling a jersey card or autograph.
“My family is originally from Pittsburgh and moved to New Mexico 30 years ago. We have always been huge Steeler fans not only because of where my family is from, but because the Steelers are the classiest orginization in the NFL. Whenever the NFL adopts rules such as ‘The Rooney Rule,’ you know where your orginization stands. I love showing my son old Super Bowl footage of the Steelers in the 1970s. He loves to watch the way the Steelers played and he loves the big hits the Steel Curtain put on people.
“Mean Joe Greene and Franco Harris have become the two favorites of my family. I can’t tell you how many times we have watched the Immaculate Reception. Greene was such a tremendous football player who played for all the right reasons. He hated to lose and that is one of the biggest reasons we love him. The best part about collecting is actually pulling a Steelers ‘hit’ out of a pack of cards. I have pulled a few, including a 2008 Leaf Limited Jack Lambert two-color patch numbered to 25. The card that just arrived in the mail recently is one that I wanted the first time I laid eyes on it: A 2011 Gold Standard Joe Greene 14kt Gold Auto numbered to 10.
“I’ve also included a picture of a game-used NFL football that ‘bounced’ into my collection on Oct. 25, 2009. I was in Pittsburgh watching the Steelers play the Vikings in a classic matchup. This was Brett Favre’s first year with the Vikings and the game was extremely hyped. We had great seats right in the Steelers’ end zone, so close you could touch the players. In the forth quarter, with the game on the line and the Vikings driving, a Favre screen pass deflected off of Chester Taylor and into the arms of Steelers backup linebacker Keyaron Fox, who took it all the way to the house for a touchdown. Keyaron ran it into the end zone, spiked the ball and it bounced up to me. I squeezed the ball as tight as I could and raised it up in victory like I had just won the game for the Steelers. What a great feeling to have; and now that memory — along with my Steelers card collection — will reside with my family forever.
“I wanted to share these memories and images with you so you can understand what dedicated collectors you have out there.”
Share