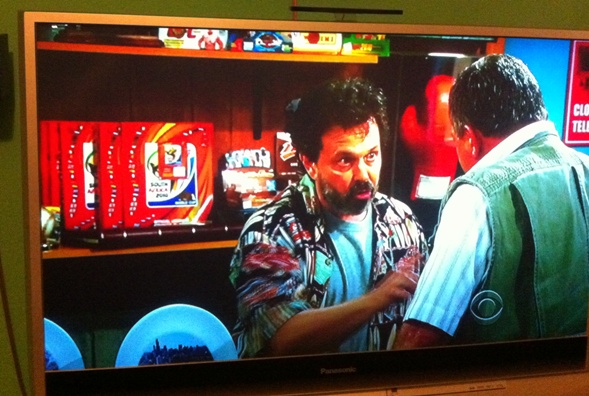 Judging by last week's episode of "S#*! My Dad Says," CBS set designers do the same thing America's most discriminating collectors do when they need sports cards: They choose Panini America.

Judging by last week’s episode of “S#*! My Dad Says,” CBS set designers do the same thing America’s most discriminating collectors do when they need sports cards: They choose Panini America.

How else to explain Panini’s Official 2010 FIFA World Sticker and Album Collection, a box of 2009-1o Panini Basketball and a box of 2010 Crown Royale Football sharing screen time with the legendary William Shatner during Thursday night’s broadcast of the popular new CBS comedy?

That premium Panini product placement — unmistakable in the screen grabs included with this post — came as something of a pleasant surprise to those of us in the office, especially given our past with Shatner that has included autograph and memorabilia cards in 2007 Donruss Americana and 2008 Donruss Celebrity Cuts.

In Thursday’s episode, “Goodson Goes Deep,” Shatner’s Ed Goodson discovers that the Steve Garvey baseball he ordered from Authentic Carl’s sports memorabilia shop has been sold to another customer. The products make their small screen debut while Goodson is inside discussing things with the shop’s namesake proprietor (played beautifully by former “Revenge of the Nerds” mainstay Curtis Armstrong).

Ultimately, Ed and his son Henry (played by Jonathan Sadowski) respond by staking out the Garvey ball owner’s house in an unsuccessful attempt to get the prized piece of memorabilia.

It’s worth noting that “S#*! My Dad Says” recently won the People’s Choice Award for Favorite New Comedy. Glad to see they’re dead serious when it comes to selecting only the best props.

Special thanks to Stephen Knight of the Panini America prepress department for snapping the screen grabs from Thursday night’s show.