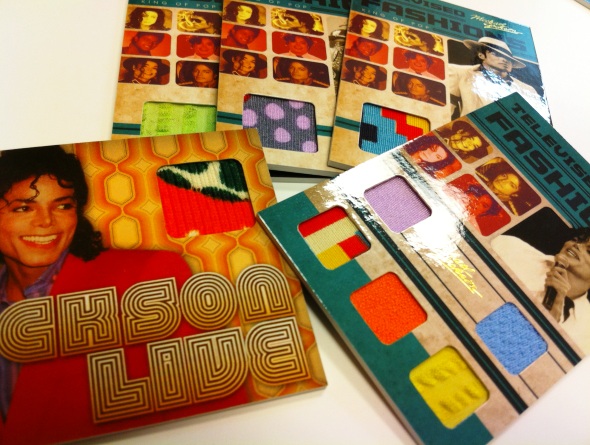 I’ll begin with this: Trading card manufacturers have been cutting up superstar-worn memorabilia and sharing it with collectors for more than 15 years now. Frankly, memorabilia cards rank favorably among the most popular and significant trading card innovations of the last 50 years.

I’ll begin with this: Trading card manufacturers have been cutting up superstar-worn memorabilia and sharing it with collectors for more than 15 years now. Frankly, memorabilia cards rank favorably among the most popular and significant trading card innovations of the last 50 years.

But when Panini America last week introduced the Official Michael Jackson Trading Card Set (including in its packs randomly inserted cards featuring pieces of clothing Michael wore on stage decades ago), one point became painfully clear: Michael Jackson had never been the subject of a memorabilia card.

The fact that he finally is struck a sour note with some Jackson fans who used various social media venues to voice their displeasure regarding us “destroying his clothes.”

They called the cards “disrespectful,” “disgraceful,” “stupid” – and those are just the adjectives suitable for print.

Clearly, there’s been a huge misunderstanding.

In the interest of full disclosure, know this: The people who worked closest on bringing this set to life (starting at top with CEO Mark Warsop) are lifelong Jackson fans who wanted nothing more than to develop a timeless trading card tribute to Jackson that his fans across the world would cherish. Most of us inside Panini America – and most of the fans we’ve heard from – have received it as exactly that.

When we set out to produce the official Jackson set more than 18 months ago (working hand-in-hand with the Jackson estate every step of the way), we did so with a sincere desire to respectfully honor Jackson’s immense legacy and to bring his fans closer to him than they’ve ever been.

Carefully and tastefully sharing pieces of his memorabilia with those folks was simply one unique way of doing that. We also worked diligently in the areas of photo selection and design to create a 240-card tribute that elegantly honors Jackson’s greatest moments, records and achievements.

The fact is that even the most passionate Jackson fans had long since forgotten about these particular pieces of Jackson memorabilia from the 1970s, which we purchased at public auction two years ago. As is the case so many times, these pieces of memorabilia could easily have been purchased by a private collector and tucked away from public view forever, never to be seen – let alone touched – by Jackson’s fans.

Instead, we bought them, carefully deconstructed them and transformed them into bona fide pieces of Jackson history, complete with descriptions on the back detailing exactly when and where the items were worn. You can admire it. You can touch it. And most importantly, you can appreciate it.

That’s why we made it. And that’s exactly what most Jackson fans are doing.

“This has to be the greatest set Panini has ever released,” said YouTube viewer royletlow after watching our video break of the first box. “I have been waiting patiently for this release. I am a big Michael Jackson fan. The world lost the greatest entertainer to have ever lived when he passed. I think it’s great that you guys are giving the fans a way to feel close to Michael. Thank you so much for creating this set. I can’t wait to get my hands on a piece of memorabilia that Michael actually wore.”

Apparently, neither can scores of other Jackson fans. Early sales of the memorabilia cards on the secondary market have been nothing short of thrilling, with some cards commanding more than $200.

“Just knowing that these cards are out there makes my heart feel good and I know that [Michael] would be so proud,” said YouTube user TheBryanSaraShow. “I’ll be happy with just having any of the regular cards. Having a special memorabilia card would make my heart feel happy, because I would own a piece of my idol.”

Michael Jackson cards making his fans’ hearts happy? That’s why we made them.