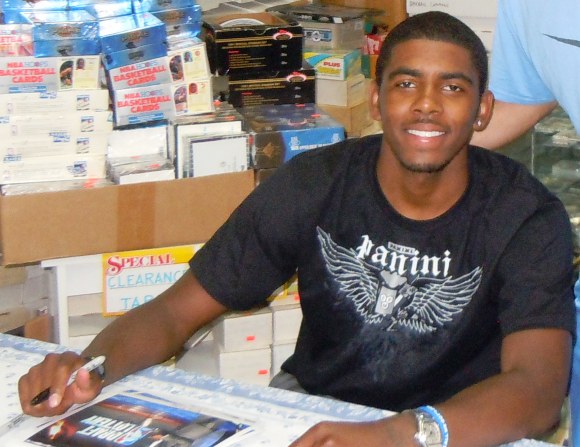 Eleven games. That’s all sharpshooting 19-year-old point guard Kyrie Irving needed as a Duke University freshman last season to prove his worth – not only to the Blue Devils, but as the likely No. 1 overall pick in tonight’s 2011 NBA Draft.

Eleven games. That’s all sharpshooting 19-year-old point guard Kyrie Irving needed as a Duke University freshman last season to prove his worth – not only to the Blue Devils, but as the likely No. 1 overall pick in tonight’s 2011 NBA Draft.

Despite suffering a severe toe injury last December that essentially spelled the end of his first and only college season, Irving – a highly decorated high-school star who owns a gold medal from the 2010 FIBA Americas U18 Championship – flashed a seldom-seen combination of athleticism and playmaking ability that thrust him rapidly to the top of most NBA draft boards.

Earlier this month, The Knight’s Lance caught up with Irving for an exclusive interview during his special appearance at Bases Loaded Sports Cards in Miami sponsored by Panini America and the NBA.

Irving proved to be every bit as impressive during casual conversation as he is on the court, discussing everything from the first time he signed his autograph (ninth grade) to his favorite Pokémon character (Bulbasaur) and everything in between.

As one of the most highly coveted blue-chip basketball prospects to come around in a long time, have you been asked for your autograph for a while now?
It’s definitely picked up over the years and going into college. I started signing autographs a lot my senior year in high school and it’s picked up a little bit more from my freshman year until now.

Do you remember when you signed your very first autograph?
Probably my freshman year.

What do you remember about the experience?
One, I asked them if they were serious because I didn’t think I was anybody at that point. I was kind of struck by the question. I was just as excited to give my autograph as they were to get it. It was only the beginning.

Were you much of a card collector as a kid?
I collected Pokemon cards for about four years. The basketball card thing . . . I had a few but I wasn’t a really big collector.

What was your favorite Pokemon card?
Probably Bulbasaur.

How has your life changed since you made the announcement that you were going to enter the NBA Draft?
It’s definitely changed a lot just based on I have aware of what’s going on around me at all times just based on the fact that not I’ve become a public figure. With me going into this business of the NBA, my life is going to change completely. It’s changing just a little bit now but it’s going to change even more once I get drafted. I just have to be conscientious of what’s going on around me and watch who I let in my circle. My life has definitely changed, but it’s changing for the better.

How do you go about preparing for the draft physically to ensure that you’re ready?
I’m just working out twice a day, as I’ve been doing for a month and a half and just continuing to get in the best shape of my life. The NBA is a totally different level; it’s 48 minutes of tough basketball so that’s what I’m preparing for every single day.

How important is it to you to be drafted No. 1 overall?
It’s definitely something that’s in the back of my mind. I think it’s something that would be in anybody’s mind. But for me, I’m just worried about getting better. That’s first and foremost, and just being the most prepared guy in this draft. Whether I’m No. 1, No. 2 or No. 3, I’m going to be happy just for the opportunity because it’s a blessing for me to actually be here now. All the hard work is actually coming to fruition. Now that it’s here, I’m just going to appreciate it. Wherever I’m drafted and whatever team I go to, I’m going to be happy.

You played for one of the proudest college basketball programs in the country at Duke. What was that experience like for you coming out of high school?
It was great. It was a little different. I wish I could’ve played the whole entire season. But only playing 11 games was still enough to leave my mark on Duke Basketball history. It was a great experience going to North Carolina and playing on ESPN almost every single night in the games I did play. That was a great experience and it’s just going to translate on to the NBA. At Duke we had the target on our back at all times. That’s something I enjoyed and now I’m going to have the target on my back being a new face in the NBA.

If you had to make the perfect Kyrie Irving Panini basketball card, what kind of picture would be on the front of it and what would the back say?
It would definitely have me making a move or above the rim dunking because most people think I can’t dunk, so that would be surprising to see on a trading card. On the back it would just say “hungry and humble.” That’s the statement I live by and that’s the statement that I want to pass on to young people coming up that are trying to make it to where I am. That statement right there – “hungry and humble” – is something I’ve lived by all my life and I think that should be on every trading card.