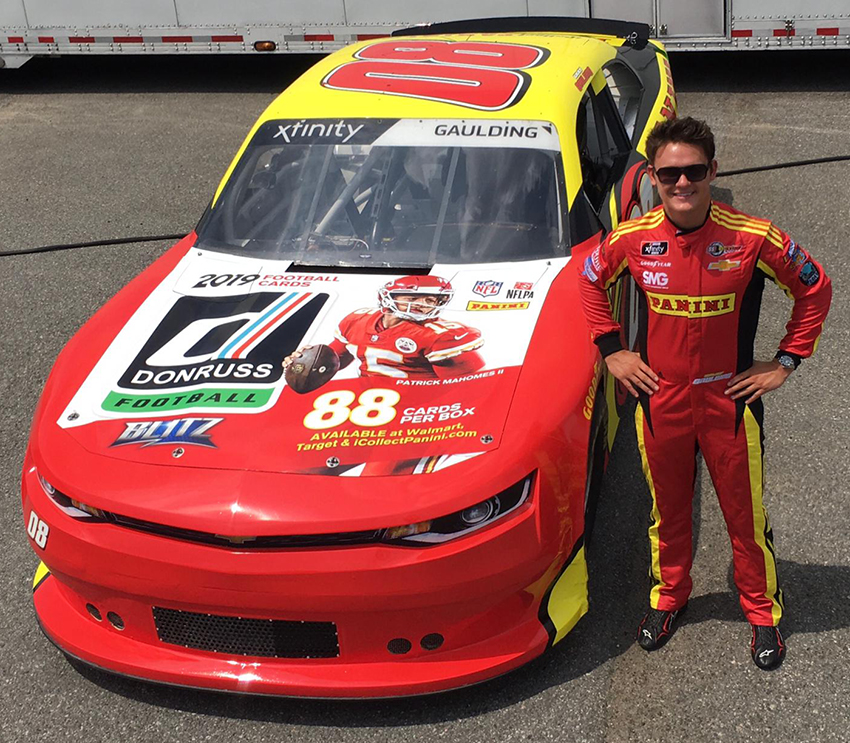 Reigning NFL MVP Patrick Mahomes was the fastest-rising player in the league last season when he threw for more than 5,000 yards and 50 touchdowns in leading the Chiefs to the AFC Championship Game. But it’s likely that he’ll never move as fast as he will Friday night at Bristol Motor Speedway in Bristol, Tenn. That’s when Mahomes, the cover athlete for Panini America’s new 2019 Donruss Football trading card product (which hits Walmart and Target store shelves this week) will be featured prominently on the hood of Gray Gaulding’s No. 08 Chevrolet Camaro during the Food City 300 NASCAR Xfinity Series race at Bristol Motor Speedway – no doubt reaching speeds in excess of 100 mph.

When the race is over, Panini America officials will auction off the Mahomes-inspired hood for charity to benefit the ‘15 and the Mahomies’ Foundation. Both Mahomes and Gaulding will put the finishing touches on the hood when they autograph it. Fans and collectors who want to bid on the autographed hood can do so by going to Panini America’s official eBay page. The auction ends Saturday, August 24.

“The release of one of our iconic products like Donruss Football at mass retailers including Walmart and Target, hobby shops nationwide and our online store so close to the start of the NFL season always gets people excited,” said Jason Howarth, Vice President of Marketing at Panini America. “To be able to benefit Patrick’s foundation, celebrate the start of the NFL season and drive awareness of both our NFL and NASCAR trading card products at mass retail in a unique and compelling way makes a lot of sense, especially with the new Victory Lane NASCAR product hitting Walmart and Target later this week.”

Panini America, the world’s largest licensed sports and entertainment collectibles company and the exclusive trading card manufacturer of the NFL, NFLPA and NASCAR, maintains trading card and autograph relationships with both Mahomes and Gaulding. But this marks the first time that company officials will cross-market NFL trading cards in the NASCAR arena.

“The last year or so has been filled with so many exciting highlights for me, but having my face larger than life on a race car is something I never thought would happen,” Mahomes said. “The folks at Panini have been with me from the beginning, from sponsoring my NFL Draft Party to Friday’s race. It’s just an extension of that partnership, and the fact that my foundation will benefit as a result means a lot to me. I’m rooting for Gray to have an MVP performance of his own under those Friday night lights.”

“Panini has been a great partner of our racing team all season long and that’s really helped promote NASCAR trading cards to diehard NASCAR fans,” Gaulding said. “But adding Patrick Mahomes to the hood of my car for Friday’s race is taking things to another level. I’m excited about it. It’s not every day I can say I’m riding shotgun with an NFL MVP.”

ABOUT THE 15 AND THE MAHOMIES FOUNDATION: The 15 and the Mahomies Foundation is dedicated to improving the lives of children. The Foundation will support 15 initiatives that focus on health, wellness, underserved communities and other charitable causes. It was established by reigning NFL MVP, Kansas City Chiefs QB Patrick Mahomes in 2019. For more information visit www.15andthemahomies.org or you can follow the foundation on social media platforms, Facebook, Twitter, and Instagram, @15andMahomies.