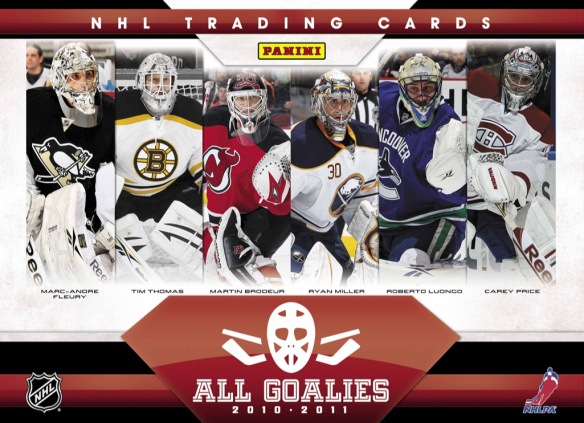 So beautifully, in fact, that the position will be the focal point for Panini America's just-announced 2010-11 All Goalies boxed set slated to arrive June 8, three weeks prior to the company's 2010-11 Score Rookies & Traded boxed-set offering.

I originally wrote this last Friday while introducing the Leather Larceny insert slated for the upcoming 2010-11 Playoff Contenders Hockey release. But based on recent developments, it bears repeating now:

“The magical, mysterious masked mystique of hockey’s goalie easily makes the position one of the most collected in all of sports. Indeed, there’s an undeniable allure to the NHL’s top netminders that always has translated so beautifully to the trading card form.”

So beautifully, in fact, that the position will be the focal point for Panini America’s just-announced 2010-11 All Goalies boxed set slated to arrive June 8, three weeks prior to the company’s 2010-11 Score Rookies & Traded boxed-set offering.

Each 2010-11 All Goalies boxed set carries a $19.99 price tag and includes 100 cards, five parallels and one memorabilia card — and it’s must-have material for puck-stopping purists. Simply, if a goalie — established stalwarts and promising newcomers alike — dressed for game action this season, he’s in this set, with the exception of emergency call-ups who appeared after the rookie cut-off date. In addition, the set includes legendary names such as Patrick Roy, Felix Potvin and Curtis Joseph.

“Ask most any dealer and they’ll agree: There’s no group of hobbyists more passionate and more dedicated to completion than goalie collectors,” said Al Muir, Panini America NHL Brand Manager. “There’s something about them that’s compelling even to the casual sports fan. Maybe it’s the personality behind the masks, or their ability to change the course of any game on their own with a spectacular glove save or an unprotected five hole. Or maybe it’s just a respect for the profound insanity that motivates these men to don the tools of ignorance.

“Whatever the case, the hobby can’t get enough of them, and All Goalies is the only place to find all of the world’s greatest puck stoppers in one place.”