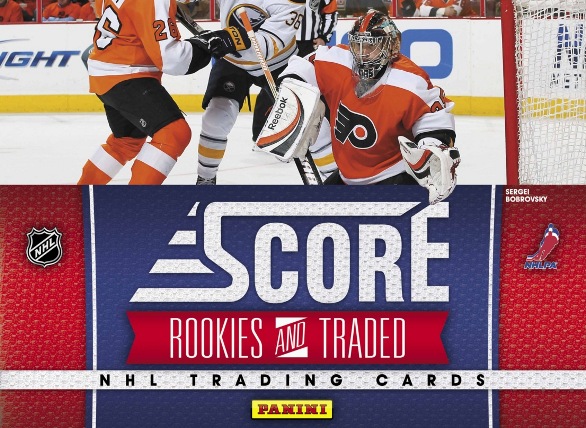 Few can argue the fact that 2010-11 Score Hockey was, pound-for-pound, one of the most value-driven products released during Panini America's history-making first season in the NHL.

Few can argue the fact that 2010-11 Score Hockey was, pound-for-pound, one of the most value-driven products released during Panini America’s history-making first season in the NHL.

The product delivered a fitting tribute to the brand’s proud history as a means of celebrating the landmark 20th anniversary of the fabled 1990-91 Score Hockey release. As it turns out, that party’s not over just yet.

Panini America unveiled today preliminary details of the 2010-11 Score Rookies & Traded Hockey Boxed set that will arrive June 29 packing 99 base cards, five parallels and one Rookie Autograph per box — all for just $19.99.

“One of the first Rookies and Traded sets was memorable for the Eric Lindros baseball card, but this one is all hockey, all the time,” said Al Muir, Panini America NHL Brand Manager. “The first 34 cards of the set feature new cards of the season’s hottest rookies — Taylor Hall, Jeff Skinner and Tyler Seguin among them—veteran players who swapped sweaters—including Michael Grabner, Tomas Kaberle and Erik Johnson — and a few key free agent signings, most notably Colorado’s Peter Forsberg.

“The set also includes 65 of this season’s most promising rookies, like Florida’s Jacob Markstrom, Detroit first rounders Thomas McCollum and Cory Emmerton, Islanders stopper Kevin Poulin and Atlanta’s puck-handling wizard, Alexander Burmistrov. It’s a great lineup that could look even better two or three years down the road. We think it’ll be a favourite among rookie collectors who will be looking to stock up on singles of their personal picks to click.”

Despite such rich player content, it’s likely a mystery 100th card, the first-ever card of an NHL legend seeded one in every 20 box sets, that’s likely to propel a true feeding frenzy. For now, though, Muir is tight-lipped on any additional details.

“Sorry, but it’s going to stay a mystery until the product releases,” he said. “All I can say at the moment is that both the NHLPA and NHL are stoked, and that we expect the card to generate some mainstream media buzz — something that’s likely to create additional traffic for stores carrying Score Rookies and Traded. It’s a rare card that can create that sort of excitement, and this is that card.”

The autograph checklist for Score Rookies & Traded is 18 players deep and includes the likes of Hall, Skinner, Seguin, Derek Stepan and Zac Dalpe, to name five.

Stay tuned to The Knight’s Lance for updates on 2010-11 Score Rookies & Traded.