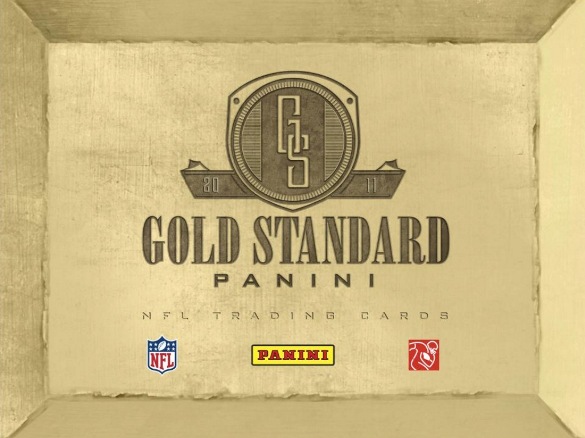 The prospects for America's most passionate prospectors just keep getting better.

The prospects for America’s most passionate sports card prospectors just keep getting better.

In early November, Panini America will bring more gold to the gridiron with the brand new 2011 Gold Standard Football.

“We look at 2011 Gold Standard Football as a tremendous opportunity to accentuate and strengthen our golden reputation, so to speak,” says Panini America NFL Brand Manager Carlos Torrez. “We’re still so early in the life cycle of this concept and no one else is doing it. There’s so much innovation left to deliver, and you’ll see a lot of it delivered in this product.

“From embedded pieces of 14-karat gold etched with team, NFL and Hall of Fame logos to cards that include authentic diamonds, this product will continue to raise the bar and create unique trading cards that are literally worth more than their weight in gold straight out of the pack.”

Given that the price of gold — currently more than $1,730 an ounce — has reached record highs in recent weeks should give 2011 Gold Standard Football a distinct marketing advantage and a unique place in hobby history.

You can get a golden glimpse of the greatness to come in the gallery below. Stay tuned to The Knight’s Lance for additional updates on 2011 Gold Standard Basketball.